After 43 years in a vault, Neil Young is releasing an album of performances recorded during a run of a dozen shows in Washington D.C., from November-December 1970. Entitled Neil Young Live at the Cellar Door, this time capsule offers intimate listening of a young Young and the young Martin D-45 he had been playing for less than a year.

The 13-song collection is available for pre-sale at the artist’s official website in high-quality digital FLAC, as a CD, or on 180 gram vinyl.

Performing two sets a night, Young used the week-long booking in the small club to hone material for his upcoming concert at Carnegie Hall, which became a mainstay bootleg record ever after. Live at the Cellar Door will provide state of the art audio mastering unavailable back in the day.

Including well-known Buffalo Springfield tunes along with fresh releases from the then new smash LP After the Gold Rush, the ever-changing artist also debuts new material at the dawn of his post-CSNY solo career. Young and vital, Young was a vital force in the post-Woodstock era and this record provides a glimpse of an emerging superstar on the verge of going supernova. 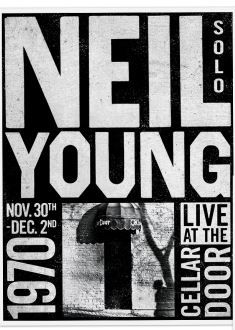 And don’t forget to see what Neil Young has on his mind at his personal website, neilyoung.com

Juber and Martin Guitars at the Metropolitan Museum

T Spoon Phillips – Music for a Socially Distant Audience – May 6