The SC-13E Special, SC-13E Special Burst, and the SC-10E expand the horizons of the Martin’s ultra-modern 13-fret acoustic-electric guitar design, pioneered by the 2019 SC-13E Koa. Upgrades on the Specials, and a satin finish on the more affordable 10E set these SC guitars apart from the earlier version.

After the phenomenal international accolades that poured out for revolutionary SC-13E Koa, it was only a matter of time before we saw new SC models coming from Martin’s state of the art facility in Navojoa, Mexico. The SC-13E Special and the Special Burst version are the most luxurious models yet offered in Martin’s Road Series of relatively affordable professional-level acoustic-electric guitars intended for performing musicians.

Each Special has a back and sides with highly figured ziricote fine veneers. A Cordia genus from Central American, ziricote is considered very close to Brazilian rosewood in looks. These gorgeous veneers are laid down over a core of solid Khaya, a true Meliaceae-family hardwood known as African mahogany in the furniture trade.

The Khaya core provides stability, but the ziricote plays a part in tone production. It is used to line the insides of the sound chamber, where it reflects and adds tonal coloring to the sound waves broadcast by the solid Sitka spruce top. The new ziricote models have a noticeably warmer, fuller acoustic tone compared to the koa versions.

The attractive ziricote also makes an appearance on the front of the instruments, where it is inlaid as the center of the fret position makers, and as part of the dynamic Aperture sound hole rosette for a new, woody take on the motif of the original SC-13E. It may be hard to see the ziricote fret dots in the photos, compared to the solid ebony of the fingerboard, but it is more noticeable in person.

Things get even fancier at the other end of the solid ebony fingerboard, where a silver script logo ties in nicely with the nickel-plated open keyhole tuning machines and their airy skeleton key buttons. These are special ratio tuners loved by Tim Teel, Head of Instrument Design at Martin, who has used them on some limited editions in the past. Each string gets its own ratio to work with the specific string diameter and tension. Supposedly, each string will adjust in pitch to the exact same amount of knob turning. One twist adjusts every string to the same degree.

The SC-13E Special Burst has a new Amberburst finish on the top, which Teel based on some other amber-heavy shading Martin came up with for previous models. This one shows the top wood grain nicely, while working very well with the darker ziricote aesthetic.

Both Specials come with the LR Baggs Element pickup and EAS tone and volume controls that protrude from inside the sound hole. This is one of the most popular pickups out there and compatible with Baggs’ Anthem internal microphone, for those who might want mod out the acoustic qualities of their electric sound. However, such alterations might imperil the Martin warranty, so proceed with caution. 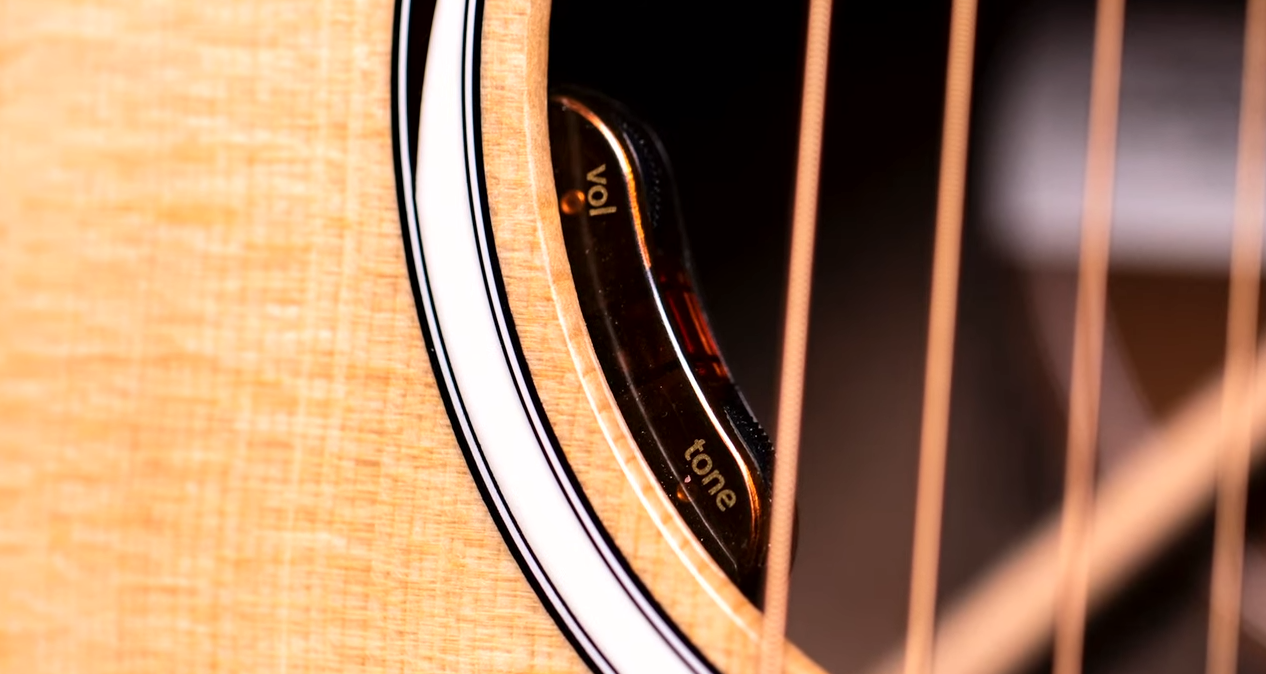 The SC-10E brings the price point down, for the most-affordable SC model to date, even though it too has fine veneers of Hawaiian koa and an ebony bridge and fingerboard like the original SC-13E Koa, which is still for sale and immensely popular. The savings come from the use of a satin finish on the 10E, instead of gloss, and somewhat simpler appointments. It does come with black tuners that look edgy and cool with the dark wood of the headstock faceplate, and a sparkly black swath to its Aperture rosette instead of the ziricote used for the Specials. Under the hood is Fishman MX-T electronics, with their own volume and tone control hidden inside the bass side of the sound hole, and the bonus of an on-board tuner inside the treble side. 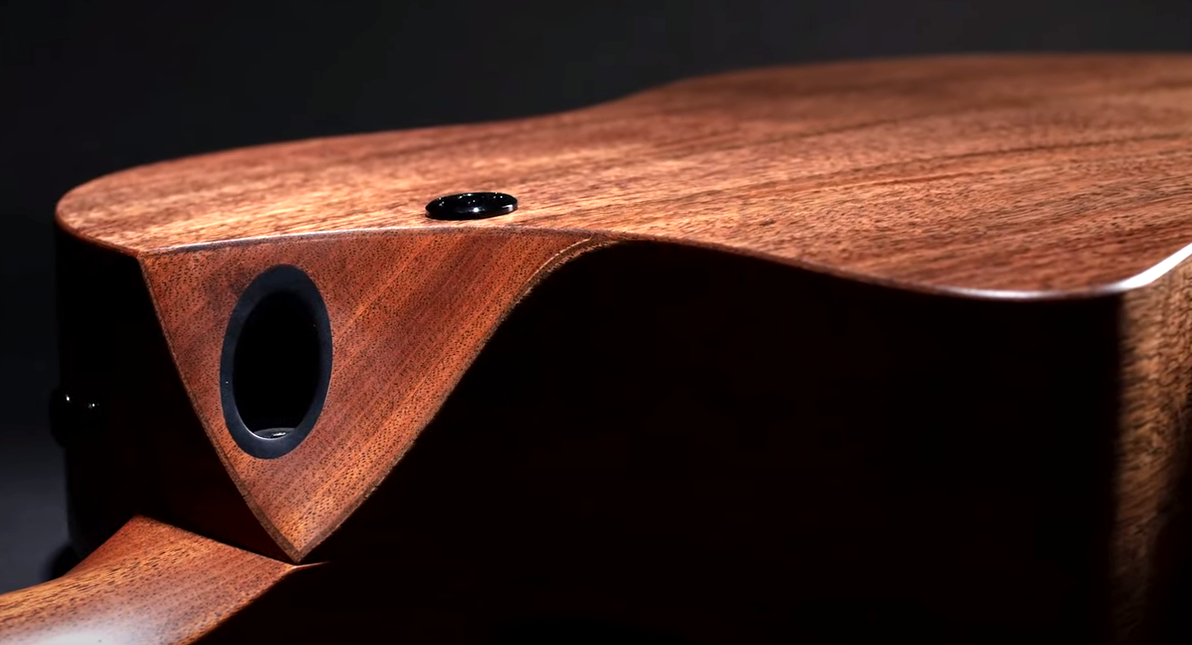 Return to the Future

The creation of the S body design combined Greene’s desire to make a Martin guitar with an asymmetrical body with Tim Teel’s admiration of cutting edge design and engineering found throughout the modern world, from high-end cutlery to the automotive industry, and beyond. He came up with the “S” designation, after constantly drawing fluid, serpentine shapes at the draftsman table.

If you haven’t realized it yet, these are acoustic-electric guitars aimed for electric guitarists, who want something versatile enough to handle any kind of music they play. The body shape and unique Tone Tension bracing allow you to take the cable out of your Les Paul or Strat and plug it into a Martin SC model and starting playing, without the need to adjust a single knob or pedal, or the worry about feedback issues that plague traditional acoustic guitars.

They come set up with very low action on the extremely comfortable neck, and extra-light strings. But they are capable of working with light and medium gauge strings, and also can be set up with much higher action. But any major adjustments require a specially trained Martin certified technician who can alter the neck angle through the Sure Align system.

The 13 stands for Style 13, at the very top of the Road Series, and include the only models in the series that have full high-gloss finish on the back, sides, and top. It is a happy coincidence that the SC design created Martin’s first regular production 13-fret guitar. As you can read in my original review of the SC-13E Koa model, having the neck join at the 13th accomplishes multiple perks.

The SC guitars are perfectly balanced when hanging from a guitar strap. No more having to worry about the body or neck sagging down and moving the fretboard out of position when both hands are busy adjusting the microphone. It also allows a long-scale neck, with its roomier frets up in the cutaway, to feel much more like a short-scale neck, because all of the frets are a little closer to the player’s body, so everything is played with a little less stress and effort on the shoulder, elbow, tendons, and hands.

Each of the new SCs has Martin’s exclusive Velocity neck, now officially called the Velocity Low Profile neck. It is indeed low, and it has a helix skew to the shaping. It is subtle, but the corkscrew effect adjusts perfectly the change in angle of the fretting hand as it moves up toward the body. It really needs to be played to be appreciated, even if you may not even notice how incredibly comfortable and relaxed it makes playing even the most complicated music.

What makes these models so desirable is a combination of the perfectly balanced acoustic tone across the six strings, and the fact you can plug them in and play at higher gain without running into the feedback issues normally plaguing acoustic guitars with pickup systems.

Like em, love em, or don’t want to have much to do with them, as I predicted two years ago, the Martin SC design is here to not just stay, but to proliferate and evolve into multiple models, and eventually with many different varieties, across many years to come. Having new SC models a little more expensive than the first SC-13E and having one notably less expensive, but all from the Navojoa factory, is a welcome and logical next step.

As for new Martins from the home factory in Nazareth, PA, well, you will have to wait until later in the year to learn more about that possibility. But not too much later. Say, oh, the morning of January 31 might be a good time to check in for any updates at One Man’s Guitar. 😉 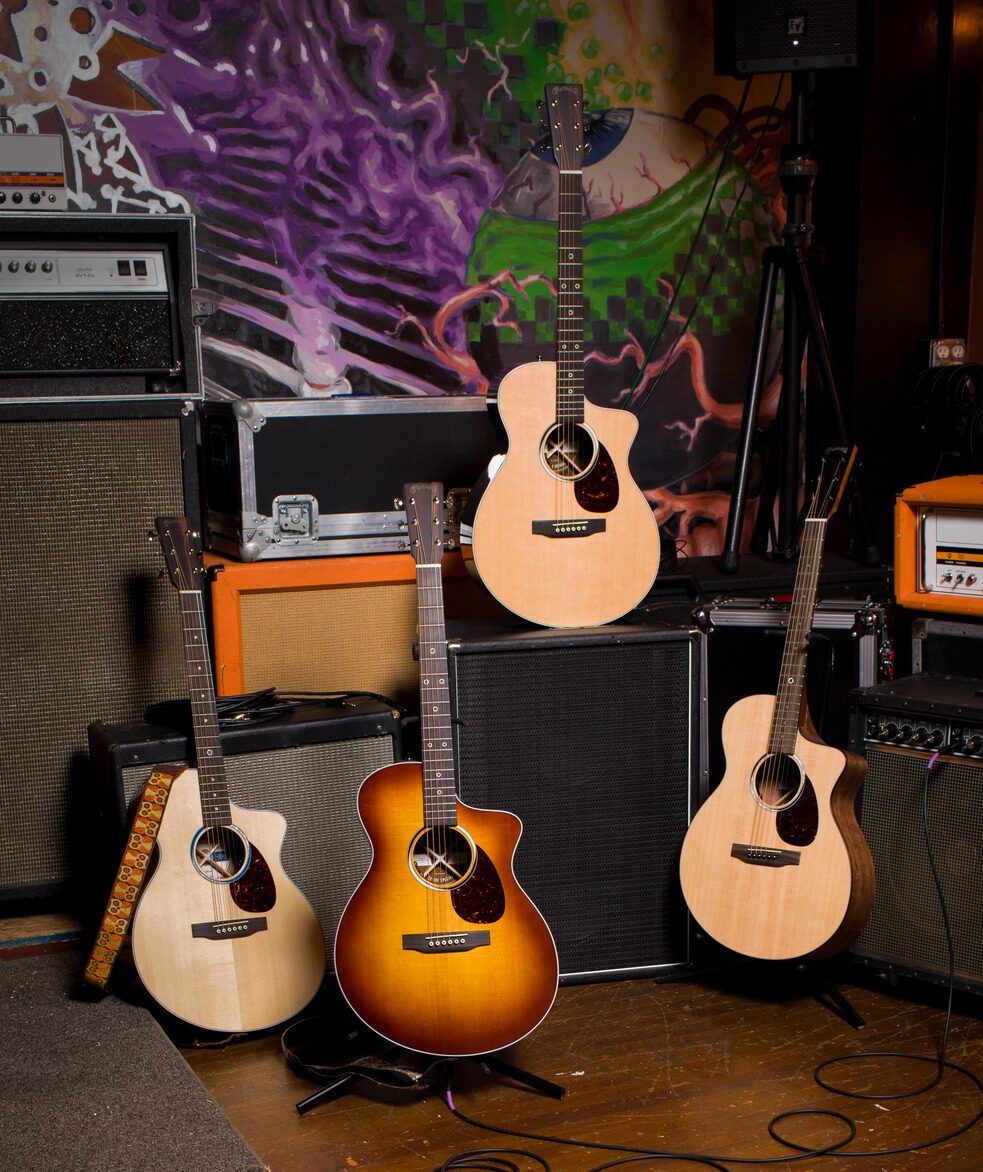