Martin Guitars is releasing another in the long line of popular acoustic guitars created in association with legendary guitarist Eric Clapton. 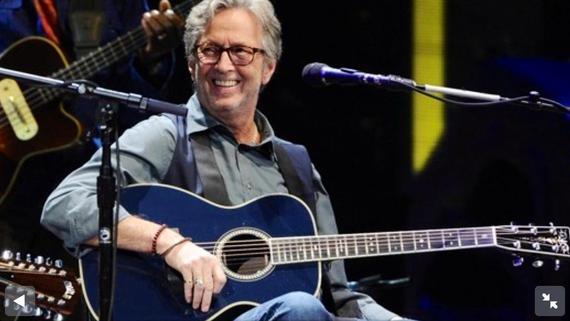 The new OM-ECHF Navy Blues is the third such guitar that was created in collaboration with Hiroshi Fujiwara, the musician and designer credited with founding the Harajuku movement in popular fashion and integrating Hip Hop musical forms into Japanese music.

The new blue guitar is a long-scale OM, unlike all previous Clapton models, which were short-scale 000s. The traditional 000 and Orchestra Model have the same body size but 000s typically come with 5/16” bracing, while the Navy Blues model has the thinner 1/4″ bracing used on most OMs.

Fujiwara provided the initial design for a custom black Martin model made for his friend Clapton, and it was later released to the public as the “Bellezza Nera” (Black Beauty.) This was followed up by the “Bellezza Bianca” (White Beauty). The white version was made out of maple with an Engelmann spruce top. The Navy Blues features Indian rosewood for the back and sides and a top designated as European spruce, more like the Nera. That Martin was specified as Italian Alpine, while the recent Madagascar rosewood Clapton models sported Carpathian spruce. I hope to nail down the exact source of the new model’s soundboard by the time we review the model next week. My guess: Swiss Alpine spruce.

The list price on this model is $6,999. According to the official Martin press release:

Other Options: Available left-handed at no additional charge

Other Comments: All prices & specifications are subject to change without notice
~
Read More
Official Martin Press Release
Special Thanks to onemanz reader “6StringMusic” for the great photo of EC in action!