A reader writes with questions regarding the D-45 Authentic differences found in models 1942 and 1936.

I’m thinking of buying one of the top end Martins. I would appreciate a little more of your take (which you touched on a little in your review of the D-45 S Authentic 1936) on the difference between the D-45 Authentic 36 and the 42, apart from just the size of the Neck. I’m from and live in Asia and therefore I do not have the opportunity to touch, see and play an actual one before making up my mind.

Your take will go a long way. Thank you.

Hello and thank you for your query about the differences between D-45 Authentics.

You mentioned in a comment on one of our reviews that you were studying guitar again after some decades. I think it is wonderful that you are returning to the guitar after some years away. While I can understand why someone would want to do such a thing with the best guitar possible, it may not always be a wise move.

Unless you are certain you will be dedicating the time and effort required to truly get back to playing guitar, you may find it worth getting a less expensive guitar at first. At least less expensive than a D-45 Authentic.

But if you are certain you wish to go the high on the hog way, these two Martin models are on the very short list of the best new guitars available in the entire world.

The difference between necks is not just about comfort or spacing preferences, a more massive neck can also effect the sound of the guitar. Steve Swan of Steve Swan guitars likes to say, “Big neck, big sound.” Stan Jay of Mandolin Brothers is typically more expressive in his opinion that a large V neck in combination with a old fashioned, non-adjustable truss rod “makes the sound vibrant, airy, transparent, punchy and powerful.”

But there are plenty of great guitars made that do not have large V necks. And the D-45 Authentic 1942 is certainly one of them.

In addition to the bigger neck, there is the wider top (and back) on the A S 36, which increases the size of the sound chamber compared to the A 42. That also contributes significantly to the robust and throaty voice. It sounds huge, because it is huge.

Other differences between these two exquisite models include the extra-thin finish on the A S 36, as well as having the top, back and sides planed even thinner than the already thin wood on the S 42.

It is likely the bracing should be similar in terms of the size of the struts and the way they were scalloped. But the 36 has forward shifted braces, further increasing the roar and rumble in the bottom end, while the rear shifted braces on the 42 helps to bring a more focused clarity to the bass string fundamentals. There is still plenty of power and presence, but the resonant undertone doesn’t swamp the bottom end so much as glow out from under it.

Both will have a bridge plate tucked under the X brace, the 36 has a bridge plate reputedly made as close to identical as the one in the real 1936 guitar in terms of thickness, even minor deviations in the shaping. Since this was not mentioned before the 2013 Authentic releases, I assume the 42 has the same sort of bridge plate found on the D-18A 1937 and D-28A 1937.

The 36 will also have a bridge, fingerboard and headstock that are made a bit thinner. Again, I assume they are thinner than those on the 42, because the 42 came out during the previous year, before they had instigated the new “make them as close as possible to the old timer they are based on” policies.

That all being said, if I had the dilemma of which one to choose, I would go with the D-45 Authentic 1942. They both sound great and there is much to love about the huge power and voice of the 36, and the clear and ringing beauty of the 42. But that honking-big neck and string spacing on the 36 would simply require too much effort to play more than basic chords in the first position – for my hands, anyway.

But Lordy! I would love to have BOTH of them if I could. 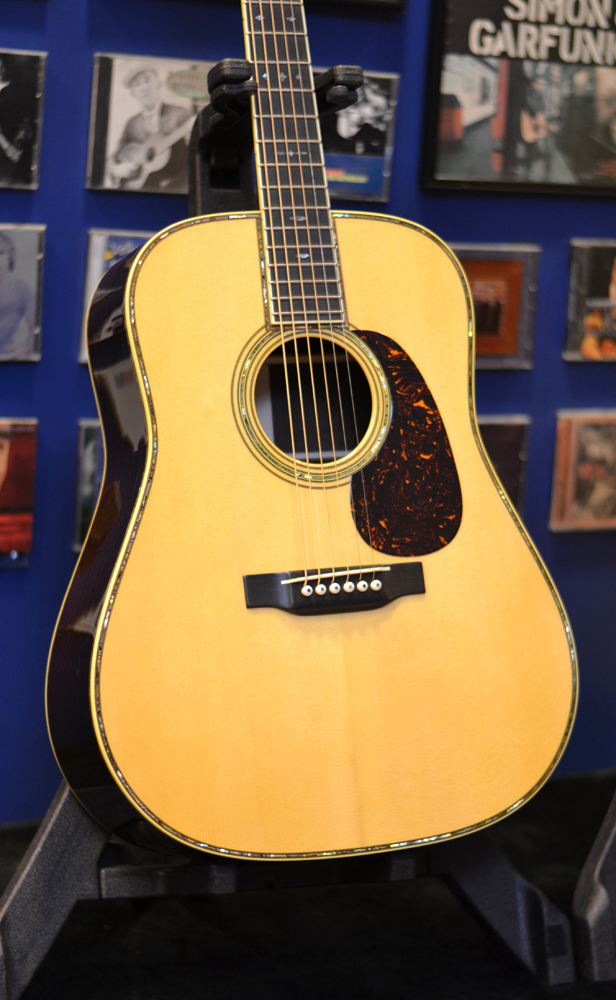 Why “Fingerstyle Guitars” Have Wider Necks