A reader inquires about the Martin OM-28V OM-28 Marquis Differences.

What are your impressions on the neck shape/feel difference between the OM-28V and the OM-28 Marquis? And the bridge spacing as well. I only recently adapted to the 28V and love the wider nut and have adjusted to the neck, much to my surprise, having played for years the standard 1 11/16 with the low profile. Also if you could comment on the sound difference, that would be great.

[Note: Both of these models were discontinued in 2014.

Martin is releasing a new OM-28 in the Standard Series, at the Spring show in Frankfurt, Germany. It has the same sort of herringbone trim and appearance as the OM-28V, while also using the same tone woods, bracing, etc. But the new model has the High Performance neck and the corresponding string spacing, which now also appears on the Standard D-18, and the new 000-18 coming out at the Spring show as well.

But the OM-28V and OM-28 Marquis will continue to appear as new stock in guitar shops for some time yet. They will also appear on the used market for years to come.]

First of all, here is the direct answer to your question.

Both models officially sport Martins Modified V neck. But the OM-28 Marquis has what is called the “30s style heel,” where the neck meets the body, which is more similar in shape to the Martins actually made in the 1930s. This affects the neck’s shape all the way down to the headstock. As a result Marquis neck has a slightly rounder barrel. This makes it feel a little tubbier, but with a more gradual slope through the cheek area. It fills out the palm in a nice way, so the bones in the hand do not collapse.

To my hand, the Marquis neck (also found on Golden Era guitars) has less of a V over all, but the area right at the back of the neck has a more noticeable V, compared to the rounder cheeks.

Also, the extra 1/16” wider string spacing on the Marquis makes the neck feel wider, or bigger, because the player’s fingers are in slightly different positions and at slightly different angles. I had a 1999 OM-18V with full neck and the 2-3/8” string spacing. While I liked the wide open spaces for my neck hand, my picking thumb found it a bit fatiguing to pull back so far to strike the low E string during alternate-thumb fingerstyle playing.

So I would naturally play closer to the fingerboard. With a modern OM that has 2-1/4″ spacing, I would play closer to the bridge. But the OM-28V’s 2-5/16” string spacing is the Goldilocks “just right” for my picking hand, landing right over the sound hole.

The real OMs from the 30s had 2-3/8″ spacing, like the Marquis. The OM-28V was the only Martin OM with 2-5/16″ for many years, and now that the OM-21 Special has been retired, it is again. I have never gotten on well with the 2-1/4” spacing used on most modern Martin OMs and would take the wider Marquis spacing any day.

The neck on the OM-28V made today has a little less mass, but a little more V feeling to the cheek area, but the V is shallower than it was 12 or so years ago. Personally, there are things I like about the 28V and 28 Marquis necks, and things that bother me. But then, I have finicky hands. The current 28V neck is more comfortable for me than those made in the earlier twenty-first century.

As for tone, if you have not become familiar with Adirondack spruce tops, you should do so before you give up your Sitka top. Adirondack spruce is drier, snappier and has a very clean, clear ring. Some people feel it is superior, others see it as simply different and a matter of taste. Some prefer good Sitka, which is warmer and thicker sounding. It has a lot of presence, and accentuates lush overtones and undertone, while Adirondack reflects them so they are more focused and discernible, rather than washing together.

Similar to how I compare Brazilian rosewood to Indian rosewood, Adirondack has more varied colors in the crayon box, with less earthiness under the bass and low mids but more vibrancy in the harmonics, and Sitka is more about rich primary colors in broader strokes across the whole tonal pallet.

One major difference between the two models is found in how they scallop the braces. The Vintage Series OMs have the same scalloped braces on Standard Series guitars, like the OM-42, OM-21, HD-28 , as well as the Eric Clapton models and the Laurence Juber models.

The Marquis has what they call Golden Era style bracing. You really have to look at the two braces side by side to get a clear understanding, but they use different angles when carving the braces, taking off more wood for the Marquis than the Standard, and the longer tone bars and X brace get wood carved off the strut all the way up to almost the center of the brace. The Vintage/Standard Series braces leave more of the center of the brace un-whittled. So they are stiffer.

Typically speaking, the 28 Marquis ignites tonal resonance when played more softly than you have to play a 28V to get the same kind of response from the spruce top. On the other end, while the 28 Marquis can be said to be as loud as the 28V, the fundamental notes off the strings aren’t as fat when strummed or played really hard, especially the unwound strings. The 28 Marquis has a more open and airy quality to its harmonics and its undertone, the sound chamber seems to be vaster than should be able to fit into that body size. The 28V has denser undertone and fatter harmonics, so it may not seem as expansive a voice, but it has a thicker smoke in the air, as it were.

But these are all very subtle differences, when it comes down to it. Compared to something like a D-18 or a Gibson or Taylor, the two models will seem very much related and most of the difference will be felt in rounder Marquis neck, and the chimier Adirondack top.

Still, I do like the throaty power I get out of an OM with Vintage/Standard bracing. They are like mini-dreadnoughts in that respect. I like the Marquis for how effortless they are to play in terms of responsiveness and dynamics. They just get a bit rattley under a serious attack. But that makes them more like Vintage OMs, even if they are actually built to higher tolerances than the old timers.

I have one guitar with Golden Era bracing, a short-scale custom 000 with Adirondack spruce and 1/4″ OM bracing. My other Martins have Vintage Series bracing.

There are other differences, such as the Marquis getting wood fiber purfling rather than plastic, a glued in long saddle vs the drop in saddle on the 28V, which may indeed increase its ability to transfer resonant string energy to the bridge plate and top. For much of its history, the 28V came with a saddle made from Micarta, made out of resin and paper pulp.  But Martin upgraded all their Standard Series and up to bone in recent years. The GE/Marquis guitars got saddles made from fossilized ivory, until Spring 2013, when they too were switched to bone. However, some FI saddles continued to trickle out as supplies were exhausted. Fossilized ivory added a bit of warmth and thickness, which helped new Adirondack tops sound a bit less brittle, but they do not have the same high end sparkle as one hears from bone saddles, which in my opinion sound more like elephant ivory from the old days than either fossilized mammoth or walrus ivory.

FYI – the OM-28 Marquis has been discontinued as of 2014. It remains rumor that this move portends the appearances of the long-awaited OM-28 Authentic in January 2015. Time will tell.

Martins Modified V neck profile has gone through changes since they started using it. Prior to year 2000 all Martin necks were hand carved with tools like a spoke shave and draw knife. Even though the individual doing the carving used thin plate templates to check the shape at certain frets, they also used their own judgment as to what felt right to their hand. No two necks were exactly alike. 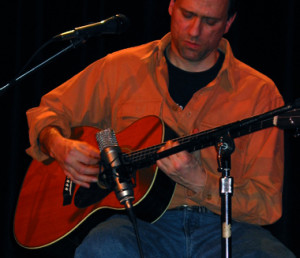 I had a 1998 OM-28VR (R was for rosewood in those days) which had a bizarrely shallow neck, but still carved into a V. No one at the factory had ever seen anything like it. It was very comfortable for my aching hand. It now resides with another lost love over the sea. But I had that OM-18V from 1999 that had a the most chunky neck compared to any other modern Martin.

The Modified V neck on the OM-28V (OM-18V and OM-45V) became more uniform in shape after they began using CNC machines to carve the neck, which was then sanded by hand. But even then, it was tweaked by a real person, so you still do not get the exact same neck.

In the earliest years of the century the CNC machine left a bit of a narrow ridge where the ebony fingerboard met the cheek of the mahogany neck that would bite into the pad on my palm just below my index finger. They also had a rather pert V that would stab into the fleshy part of my palm near the thumb. By 2006 the neck had lost most of that ridge and the V had been softened some.

The original OM-28 Golden Era guitars had a neck more similar to the Vintage Series OMs. The OM-18GE was different, as it was meticulously copying a particular 1930 OM-18. This was the first guitar with the 30s style heel, but it also had a more pronounced V than the 28 GE or 45 GE – or than most any 1930 OM I have played. When there was a Brazilian rosewood supply crisis, they stopped making the 28GE and 45GE and renamed them 28 Marquis and 45 Marquis, to signify the use of Indian rosewood.

I do not now remember how much the GE/Marquis neck changed in the 10 years since they first appeared, but today we have the nicely rounded barrel with a mini V at the apex of the neck. But with the slightly wider string spacing as well, they feel a bit thicker in the upper frets than the neck on the OM-28V.

[Note: It is believed as highly likely an OM-28 Authentic will appear in January 2015. This will come with the same hide glue construction and other exacting simulations taken from an OM-28 from the 1930s, and will feature Adirondack spruce over Madagascar rosewood.]