Martin makes a humdinger dreadnought in their CS-Bluegrass-16

“There is something charming to the chime ringing off the unwound treble strings, supported by a palpable cushion of rosewood undertone welling up from the bottom end, where the bassiest string is plump and succulent. Overall, this is a guitar of power and personality.” 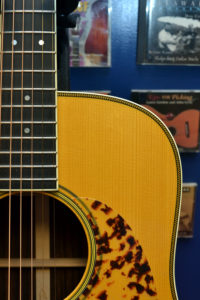