A Limited Edition of 75 Instruments

“There is a rich throb in the bass that is a bit fuller and more pronounced than typical for an Auditorium size Martin. At the other end, the treble lifts out from the voice, pristine and with thinner fundamental notes reminiscent of the old 000s and OMs of the 1930s. Framed between them, the focused notes of the midrange solidify like firm little gems. But during extended playing, the resonant undertone permeates up around the midrange, smoothing it out, as heard in other modern rosewood Martins with this body shape. And just like its voice, the feel and looks of the 00041-15 offer the sort of never-found-together-before array of facets that has come to epitomize the CS guitars.” 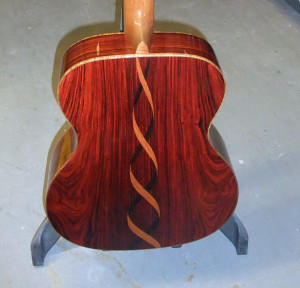