and Put a Song in Your Heart

About this same time each year a good friend of One Man’s Guitar visits this part of the country to see old pals and meet some new ones, while enjoying good food, good talk, and good music. Social calls are made, cases appear from behind doors, and coveted old instruments are cradled like newly arrived infants, inspiring the same sort of onlooker responses of delight and preciousness. 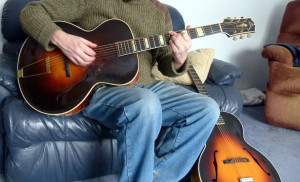 Few vintage instruments inspire such devotion, and price tags, like Lloyd Loar Gibsons, the exquisite vintage guitars and mandolins made at the Gibson Musical Instrument Company during the tenure of Lloyd Loar. And on this particular day you couldn’t swing a dreadnought without hitting a priceless Loar – shutter the thought.

Mr. Loar began working at Gibson in 1919 and left in 1924, apparently after disagreements with new management. Among Loars many innovations, he is credited with developing the F-hole archtop design, similar to a violin or cello, and for the floating fingerboard, which, like violins, extends over the soundboard without touching it, and is now a standard feature of the modern archtop guitars used for Jazz music. But when they debuted, archtop guitars like the L5 were used for all sorts of music, and at times that holds today. For example, Maybelle Carter played her Old Time tunes on an L5 made in 1928, and fingerstyle acrobat Howard Emerson plays sliding bottleneck blues on his 1930 TGL-5, which had been converted from a tenor guitar to a 6-string 1935 (see comments below.)

We played an L5 from January 1925, which would have been built during 1924. It had maple for the back and sides, instead of a birch back used on earlier examples. And alongside it was played a 1930 L5, with large block inlays on the headstock. Dry and punchy, each guitar had a clear voice with surprising volume.

But it is the mandolins for which Loar is most remembered, like the one played by Bill Monroe, the father of Bluegrass music. Monroe’s was graced with a flower pot inlay on the headstock. But the ones with the fern are much rarer, and will command prices in excess of $200,000. Although Loar is credited with making one A-Style mandolin, with a symmetrical teardrop body, it is the fancier carving on the F-Style mandolins that are admired for the craftsmanship they exhibit, even if both styles can provide the classic ting and ring Bluegrass musicians revel in.

There were two Loar F5 mandolins present, a fern signed by Loar on March 24, 1924, and one without the fern signed on April 12, 1923. Also present was a stunning K-5 Mandocello, one of only six known to exist. This one was signed by Loar on October 13, 1924.  With serial number 76980, this instrument is not listed in the mandolin archives.

In addition to the Gibsons, there were two Martin C-3 archtops from 1934, two serial numbers apart from one another. And with Brazilian rosewood backs that undoubtedly came from the same log. Interestingly enough, the grain pattern on the backs are upside down from each other. While it was an archtop kind of day, flattops were well represented by the 1937 D-18, belonging to a guest, which is one of the supreme examples from what is considered the supreme year for pre-war D-18s.