George Barnes just may be the best guitarist you (thought) you never heard. He appeared  at more recording sessions than any musician in the union files – blues, jazz, rock n roll, folk, country and western, you name it.

… Then, I heard the duets of George Barnes and Bucky Pizzarelli. I was enthralled with the musicality of the tunes, the breathtaking licks, the slower passages of glistening, liquid tone. For some reason I assumed the suave, James Bond looking guy with the colorful name must have been doing all the exquisite lead playing. Only later did I realize it was the squat, cigar-chomping George Barnes who was tripping the light fandango in such a transcendent manner.

He had a lot of practice, as it turned out… 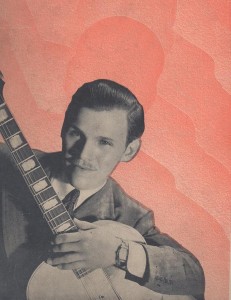