According the BBC, “China has the biggest ivory market in the world – some estimates suggest 70% of the world’s trade ends up there.”

The agreement to support the latest CITES resolution in an effort to stem the extinction of elephants came as a shock back in October, but Chinese delegates claimed Beijing wanted

Conservation group WWF welcomed the latest news, calling it a “historic announcement… signalling an end to the world’s primary legal ivory market and a major boost to international efforts to tackle the elephant poaching crisis in Africa”.

Yesterday, I picked me up a Gibson Lloyd Loar mandolin made in 1924

And then I put it back down again before its owner got too nervous. 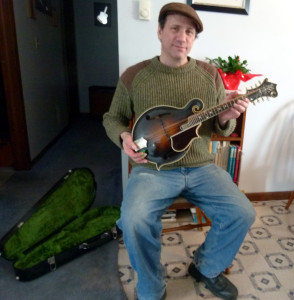 The legendary Lloyd Loar was a master luthier whose mandolins and guitars made for the Gibson musical instrument in the early 1920s are among the most highly coveted ever created. And this one sure had that ring thing goin’ on!

More photos of this and other Loars played that day will follow shortly.

But after a day of playing vintage Gibsons and Martins, today will be spent back at the Martin factory, with another look at the newest Martins just out for NAMM.

The evocative time capsule photographs from the estate of David Gahr resurrect some of popular music’s most beloved artists in their prime, at the Morrison Hotel Gallery, in Soho, NYC.

From Leonard Bernstein to Patti Smith, a young Willie Nelson to a very young Bruce Springsteen, the royalty of Jazz, Folk, Blues and Rock n Roll preserved by David Gahr in living black and white.

Clowning around, or intent in their work, with joyous expressions or taken in moments of deep reflection, there is an intimacy to these pictures that seem to capture the personality of the personalities, as if one might still hear the breathing or the laughter if they listened hard enough.

These limited edition prints are available for sale and can be viewed here:

Or better yet, see them up close and in person.

The gallery is at 124 Prince Street, between Wooster and Greene.

I wish I could afford all of them!

Special thanks to Stan Jay of Mandolin Brothers for the heads up on this wonderful display of David Gahr photography!

With a record price, the guitar that changed American music, Dylan’s Strat from Newport ’65, sets another milestone.

When Bob Dylan ripped into “Maggie’s Farm” in front of a stunned crowd at the 1965 Newport Folk Festival, not many people realized they were seeing a paradigm shift in the current of popular culture that would reverberate around the globe for decades to come. Fewer still would have guessed that the Fender Stratocaster with the sunburst finish strapped around the lanky 24 year old that evening would later be sold for just shy of $1 Million Dollars.

But that is exactly what happened today at Christie’s in New York City, as the 1964 guitar used by Dylan to officially “go electric” sold for a record $965,000 to an anonymous bidder, almost doubling the top estimate of $500,000.

Serial number L31324, and sporting a neck date of 2 May 1964, this alder body, maple neck, Brazilian rosewood fingerboard guitar was used during sessions of Bringing It All Back Home, and possibly some sessions for Blonde on Blonde, as well as the infamous electric set at Newport.

Sometime after the historic gig, the guitar was reputedly left behind on a private airplane and taken into possession by the pilot, who claims to have made attempts to return it. After almost half a century, in 2012, the PBS television program History Detectives were able to match the wood grain on the top of the guitar with a close-up photograph of Dylan on stage at the concert. Originally Dylan’s attorney claimed the artist was still in possession of the fabled guitar, but after an undisclosed settlement between Dylan and the pilot’s family, the sale went ahead, and garnered a price beyond all expectation.

I remember vividly the first time I saw the black and white footage of the performance. While wild and a bit distorted, it is hard to believe that Dylan decided to go electric only the day before (after having performed three acoustic tunes at the “workshop” portion of the festival, but taking offense at the way festival officials spoke negatively about Paul Butterfield’s use of electric instruments.) With Mike Bloomfield on guitar, Jerome Arnold on bass, Same Ley on drums, and Al Kooper on organ, it is easy to see how electric the performance actually was, and how a great many people responded to the raw energy in a favorably manner, despite  any actual booing that took place. While some people claim the booing was in response to the brevity of the three-song set, Dylan felt otherwise.

In a 1965 interview he was quoted as saying, “Well, I did this very crazy thing, I didn’t know what was going to happen, but they certainly booed, I’ll tell you that. You could hear it all over the place…. I mean, they must be pretty rich, to be able to go someplace and boo. I couldn’t afford it if I was in their shoes.”

In any case, “Maggie’s Farm”, from the electric side of the just-released Bringing it All Back Home, the single “Like a Rolling Stone”, which appeared a week or so before, and “It Takes a Lot to Laugh (It Takes a Train to Cry)”, then called “Phantom Engineer,” soon to show up on Highway 61 Revisited, made clear the direction Bob Dylan and progressive American music would be taking. And the three tunes were played at Newport on the guitar sold today, for a fraction of what Dylan has earned playing many other Strats through the years.

Did Jim Irsay, the zillionaire owner of the Indianapolis Colts, have a hand in the bidding? After all, his collection includes Jerry Garcia’s “Tiger” guitar, the guitar George Harrison played at the Beatles’ last public concert, and he may have been involved in the auction that set a then record amount for Eric Clapton’s “Blackie.”

We may find out eventually.

The Unofficial Martin Guitar Forum has thousands of members world wide. The small percentage who make the trek to Nazareth, PA to meet in person at their annual get-together have formed an extended family beyond what normally comes from meeting people from the internet.

“It is the rare sort of bond normally reserved for old army buddies, or the lifelong friendships formed during one’s college years. They sometimes find it hard to explain to their spouses or family and friends back home, so they will bring them along and let them see for themselves…

While other guitar brands have their loyal fans, none seem to evoke as much reverence and affection from their admirers as Martin, and this has led people from greatly diverse backgrounds to find they share a similar love of music that transcends their many differences…

Republicans room with Democrats, liberals stay up till dawn with the conservatives they looked so forward to seeing after a year apart; even Yankees fans find themselves warmly embraced by fans of the Tigers, Oriels and Red Sox. From the Oscar winner to the homemaker, the CPA to the MBA, all and all, they have found common ground in this most unpretentious celebration rooted in the love of music and Martin guitars…

As one member put it, “Music is a unifying force that reaches across many boundaries and brings people together in very deep and lasting ways.” Martinfest is living proof of that.”

Read the full Article on Martinfest 12 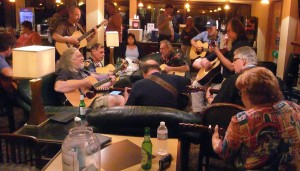 A complete schedule has been posted of the Taylor Guitar Road Shows May-June, where you can play the latest guitars, meet Taylor reps and learn about their Expression pickup systems. There are many dates in Europe, as well as the U.S.

On June 18th they will be at