Leo Kottke popularized fingerstyle acoustic guitar like no one else.

Like his contemporaries John Fahey and Jorma Kaukaunan, he turned on the Woodstock generation to wonders of hardcore fingerpicking, and for many years Kottke was named Folk Guitarist of the Year repeatedly by Rolling Stone Magazine’s readers poll.

Born in Athens, Georgia on September 11, 1945, at 69 years of age the “great big boy” continues to delight audiences through his recordings, broadcast appearances, and live concerts.

His innovative style of fingerpicking on 6 and 12-string guitar shows the influence of Mississippi John Hurt and Merle Travis, but mostly in how it differs, and how it employs an expanded use of harmony, counterpoint and polyphony.

Hallmarks of his style include using his forefinger in tandem with his thumb to create kinetic bass parts, and a tendency to avoid using the highest treble string, except when necessary, where as most traditional fingerstylists rely on it as the primary source of the melody.

Leo Kottke is also known for his engaging stories, and his baritone singing voice, even if he only uses it now and again. Together with his instrumental compositions they have earned him many awards over the years, including being voted Folk Musician of the Year by Rolling Stone’s readers poll several years in row.

Review of Leo Kottke in Concert 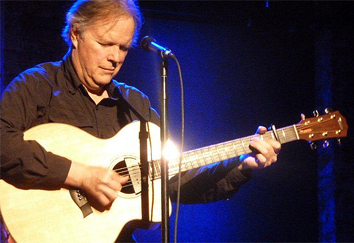 “…I inquired about them after the show. Leo said he doesn’t follow a set list. But when I mentioned details of the technique employed, he had no trouble recalling the titles; Four Cents and Flattop. “Four and Flat are new tunes.”, he added. “Four is a take on something Toots Thielemans said to Dave Evans…”