The D-45 gets new binding and Style 28 returns to its roots while embracing Martin’s vision of its future.

The entire Standard Series that defines Martin guitars to the world has been uniformly converted to vintage guitar aesthetics achieved by applying Aging Toner to the Sitka spruce tops. While the Standard Style 18 and 21 models retain the faux tortoise binding of their predecessors, those made in Style 28, 35, 36, 40, 41, 42, and 45 all sport the Antique White binding introduced on select models in recent years.

Gone are the stark white bindings and the last of the black pick guards. Gone too are the tops with the natural French vanilla color slowly yellowing across the years as sunlight tans them toward butterscotch and onto pumpkin orange as the decades roll by. The appearance of the Aging Toner has been formulated to fall somewhere between Martin’s previous offerings of vintage-esque hues, and lands more in the butterscotch spectrum than not. Many of the new Standard Series models can be ordered with a Sunburst top or an Ambertone top.

Diamonds in the Black

Similar to the makeover given to Standard Style 18 a few years back, which combined Martin’s modern High Performance Neck with the scalloped forward-shifted bracing, tonewoods, and open-back tuners of the old Vintage Series 18s, the domino dots and black and white line inlay of last year’s 28s have been retired in favor of the bold herringbone trim around the top, and the diamond position markers gleaming from the black ebony fretboards of the (soon to be) extinct Vintage Series 28s. And the entire Standard Series will likewise be getting the High Performance Neck. Their marketing data suggests it is the best way to guarantee Martin’s cash flow remains very much in the black.

The High Performance Neck combines a Modified Low Oval shaping to the neck itself with a fretboard that has the High Performance Taper, measuring 1-3/4” wide at the nut, and 2-1/8” at the 12th fret – specs that have become the industry standard among popular guitarmakers. It does appear that Martin has made its last 1-11/16” Low Profile neck, other than on possible future special or limited editions.

That the HD-28 was being remade with the HP Neck in the image of the HD-28V has been known to me for some time now. But whether they would be uniformly remaking all the 28s was an open question until quite recently.

As the man with his name on the headstock, CEO Chris Martin remains intimately involved with many of the decisions that lead to just which Martin guitars end up for sale and when they will appear before the public. For example, it was his fourth quarter decision to withhold certain models from last year’s Winter NAMM until the Summer show. And even then, the revamped Standard D-28 (2017) didn’t get the go light until the last minute.

I was among those holding my breath as to just what exactly would be the final specs of the new Standard Series Martins when they were displayed at the Winter NAMM trade show on January 25, 2018.

One interesting tidbit, the 00-28 and 000-28 are keeping the Style 28 back strip, while the others are moving to the vintagesque zig-zag back strip used on 28s in the pre-WWII years. I had to wait until today’s executive luncheon ended to confirm this is indeed the way things will be at NAMM.

According one of those well-fed execs, “If an H appears in the model name (i.e. HD-28,) then it will have a zig-zag back strip…if no H, it will get a checkerboard pattern,” which appeared on contemporary Style 28 models since the late 1940s. 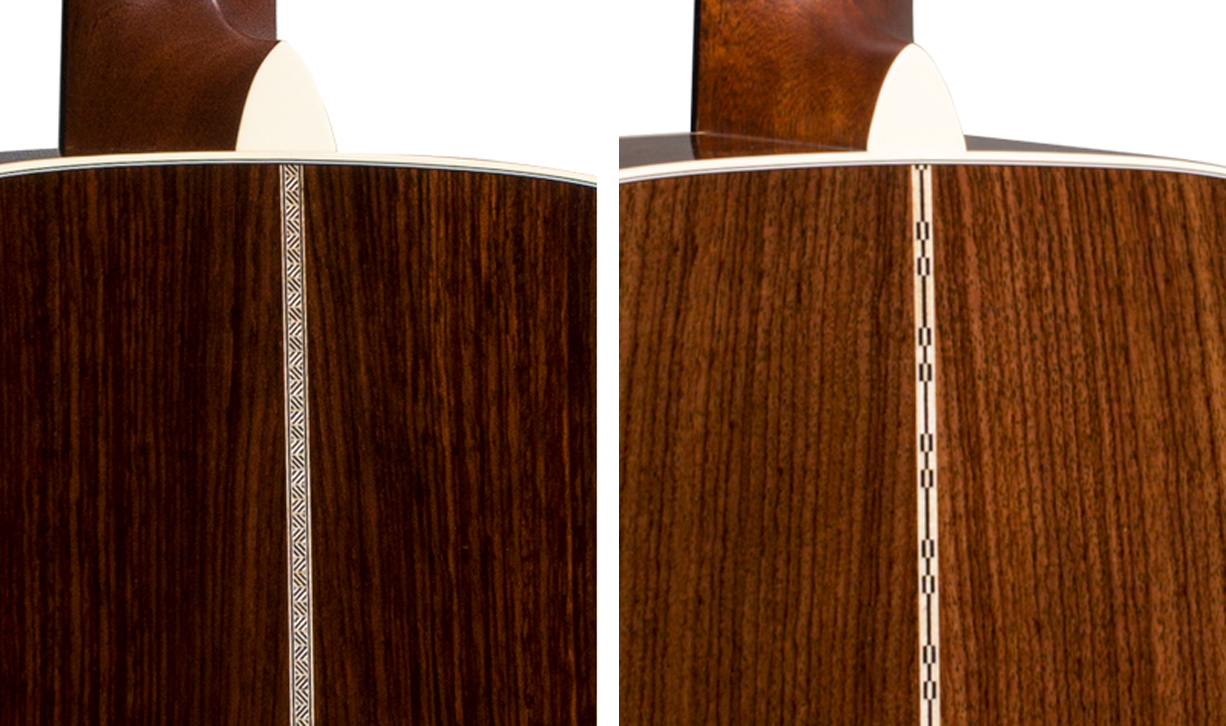 Photos: A tale of two 28 back strips (click to enlarge)

The H designation once signified herringbone trim and scalloped bracing. In the new Style 28, some guitars with both of those features do not get the H. And yes this does mean the OM-28 (2018) has surrendered its 1930s zig-zag for the 1950s checkerboard. But it and most of the Standard Series instruments with (2018) in the name get an upgrade in tuners, to Schaller GrandTune™ machines. Style 35 guitars retain the chrome enclosed Grover Rotomatics associated with Style 35 throughout its lifetime.

It Is What It Is

Change often comes slowly at Martin Guitars, while some of their biggest fans have a hard time accepting any change at all.

The loss of grained ivoroid bindings from the OM-42 or the additions of Antique White binding and Aging Toner to the top-of-the-line D-45 may seem like sacrilege to some (who had no intention of ever buying a D-45 anyway,) but it is the change to forward-shifted bracing on the HD-28, D-35, D-41, and D-45 that may prove much more controversial in practical terms, just as it has been for the D-28 2017 model that appeared at Summer NAMM.

The term forward-shifted bracing refers to where Martin placed the X brace in relation to the bridge plate on Dreadnought models made in the 1930s. It is often said to be one inch from the sound hole, but it is all about the flexibility of the spruce soundboard around bridge plate, father down the top from the X, which matters. That is where the majority of the sound-producing energy is transferred from the guitar strings to the musical instrument.

The bracing was moved nearer the bridge plate sometime in 1938, to a position now called “rear-shifted bracing.” And then it was brought forward a little bit at a time until the late ’50s, when it reached the position that was considered the “standard position.” That is, until now.

Moving the center of the main X brace that little bit farther away from the bridge plate on a Dreadnought-size guitar increases bass response noticeably, while adding more echoy resonance to the voice in general.

Martin going all-in on forward-shifted bracing (not including 12-string models) will bring further uniformity to the Standard Series, while also severing ties with the Martins made in the final 40 years of the twentieth century, at least when it comes to the brace position. There is no doubt it changes the voice of a guitar. But it will be left to the individual guitarist as to whether that is a good thing or not.

Likewise, the Company is all in on the take-it-or-leave-it stance concerning the High Performance Neck.

While the playability and feel of the HP Neck allows their ship-of-the-line Martins to enter into direct competition with makers like Collings, Huss & Dalton, and Taylor Guitars, not all guitarists are happy with the new Martin neck. They will have to look to Martins outside of the Standard Series when seeking a vintage style V neck, or they must look to the Custom Shop if they want a new Martin with the Low Profile neck from the old Standard Series.

Photos: The new D-45 (2018) has vintage looks and modern construction (click to enlarge)


It can be argued that this reimagined Standard Series may be the most important event in the continued success of the Chris Martin’s family business, since his great-grandfather, Frank Henry Martin, brought the Company into the twentieth-century and piloted it through the Great Depression. It took many years of trial and error to bring all these specs into one unified collection of reasonably-priced, professional-level guitars.

Now in his 60s, today’s Mr. Martin is gearing up to follow his long-time friend Dick Boak into retirement. He will be remembered for leading his Company out of one economic slump and through several others, by embracing and respecting Martin tradition while also introducing and championing modern technologies, and alternate and environmentally responsible materials, often combining the traditional with the futuristic to break new ground that will prove to be sound bedrock for his business to build upon for many years to come.

For guitarists who long for Martin guitars made more like the old timers, he has provided the excellent Authentic Series of meticulous vintage Martin recreations. And for those who want Martin to boldly step outside of their tried and true designs, there are the many special editions and Chris’ own CEO Series.

And now, his transformation of the Standard Series that began with the D-18 makeover in 2012 has come to fruition. By infusing many aesthetic features of old Frank Henry’s pre-war Martins with the modern technology like the High Performance neck, made possible in part by Martin’s exclusive two-way adjustable steel truss rod, the effort to return Martin’s Standard Series to its rightful place as the industry standard for top flight acoustic guitars is fully realized. It may very well be among the wisest moves Chris Martin could make as he prepares for the on-coming century of Martin guitars.

Check back soon, as we will be writing about other new Martins as soon as I am given the permission to start blabbing!

In the mean time…

All guitars listed have new specs, or are wholly new to the Martin catalog for 2018.