A Grand Jumbo 12-string with a Gloss Top and on-board Electronic amplification.

Made from solid mahogany and Sitka spruce, using the largest ever made by Martin. At this price point, the new Grand J12-16GTE offers more tone per dollar than any other 12-string currently available from Martin.

“There are all the bright and clear chimes one could desire coming off the trebles and harmony strings. And there is a nice definition in the bass, without all the smoke clouds that can gather under the low end of a rosewood guitar with a large bottom end.” 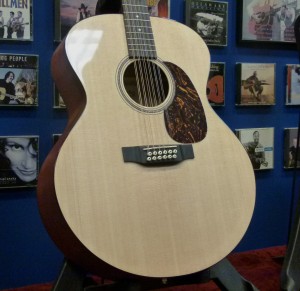 The CEO-7 is Martin’s successful take on the prewar Gibson L-00, which remains more Martin than anything else. It is a slope-shoulder 00 for the ages.

“When it came down to it, the whole time I was playing the guitar I kept feeling like the CEO-7 is the Golden Era Series reissue of a pre-war Martin that never existed. One might say it seems like it came from an alternate universe where Martin had been copying Gibson designs from the 1930s, rather than the other way around. But just as Gibson’s square-shoulder dreadnoughts like the Dove, Hummingbird and Gospel sound little like a Martin D-18, the CEO-7 may have a certain trebley ring thing that reminds me of an L-00, but it also has a resonance and sustain unlike any Gibson I ever heard.”

Read the Full Review of the CEO-7

Gibson adds to the growing number of “as close as we can make em to how they made em back then” guitars with a replica of their first round-shoulder Jumbo model, which debuted in 1934. And now it has been resurrected as the 1934 Original Jumbo, which debuted at Summer NAMM.

The model is based on a rare first-year Jumbo, serial number 507A, residing in the impressive collection of Gary Burnette of Bee 3 Vintage Guitars, in Asheville, North Carolina.

The advertising copy of the day said the original Jumbo model had “a heavy, booming tone…a bass that will amaze you and a clear, brilliant treble in perfect balance.” So, what about the 2013 version?

Burnette has yet to see an example of the new replica, but he did tell One Man’s Guitar that Gibson had shown great enthusiasm and care in their efforts to create an instrument as close to the genuine article as possible.

The Gibson press release said they were successful in reproducing the sweet mids and “deep inviting sound” heard from the vantage namesake of this new model. We look forward to a test drive sometime in the future.

Specs include mahogany back and sides with dark toner; an Adirondack spruce top, sanded thinner than modern Gibsons, rosewood for the fingerboard and straight bridge, a large V neck and period-correct string spacing, long saddle, and a dark sunburst with a small center pool of autumnal color, from harvest gold to twilight orange, to burnt umber fading into charcoal, glowing like a warm spotlight, centered between the bridge and sound hole and barely reaching across the traditional, tiger-stripe pick guard.

The edition is limited to 100 instruments. Call your dealer immediately, if you want one.

But it is our hope this may lead to a general release Jumbo that benefits from the modern trend to make guitars the old fashioned way.

The U.S. debut of the Yamaha CGX102 nylon string acoustic-electric guitar with advanced electronics and a modest price.

Priced well under $500, the CGX102 comes with a solid spruce top, and a body made from nato. Also known as “eastern mahogany,” nato, or nyatoh as it is spelled in Southeast Asia, resembles cherry in looks, more than it does mahogany, but it is a suitable replacement for mahogany on lower-priced guitars, especially when matched to a solid top and played through electronic amplification.