She looked down and turned my hand this way and that before dropping it. “You’re old.” she said factually.

Swiftly I took hold of her firm, flawless arm, before softening my grip and sliding my hand over her ridiculously smooth shoulder, past the skimpy strap of her dress and behind her slender neck, spreading my fingers up into her long, heavy hair to clutch the back of her head in one sudden motion.

She trembled in response.

“And you’re… not.” I said, before pushing her head toward me.

Slowly inhaling the scent of her face, I pressed my mouth onto hers and kissed her, this way and that, for a very long time, as I shifted my weight onto the cushioned window box where she reclined, settling inside her long, slender arms and impossibly long legs, before pulling the last adhesion of my lips from hers.

“I’ve always wanted to do that.” I said.

She looked down between us and then to the side, as she stirred in peevish reply. “I guess you couldn’t see yourself dating the dizzy Rock chick.”

“You’re not a dizzy Rock chick!” I said, surprised at the sudden display of insecurity.

She looked up and behind me, calling out. “I’m NOT a dizzy Rock chick.” to her flatmate, who I didn’t even know was there. But the tow-headed blonde never turned our way from her sofa seat.

“She doesn’t even know we’re here!” she said. “She’s watching — “[some JLo sort of celeb name I cannot remember, followed with the full name, said in response to my blank look.]

I pretended to know who it is. “I’m old, I don’t use compressed names like. I would be what? Toe Fill? Spoon Full?”

She snorted a short chuckle and looked down between us again. And then raised her eyes into the silent intensity of my own.

After a long, still moment I said, “I never thought I’d stand a chance.”

With a mix of feeling flattered and disturbed by the implications of all that was now happening, she dropped her gaze and squirmed a bit, as I waited for her to look at me again.

Our eyes met. But before she could speak, the shrieking alarm on my iPhone went off and I woke up with a start, and an annoyed cat on either side of me.

Neither were as annoyed as I, however. And crestfallen to be sure.

But at least I got to plant a serious kiss on the mile-wide mouth of one Liv Tyler, circa 2001.

I’ve always wanted to do that. 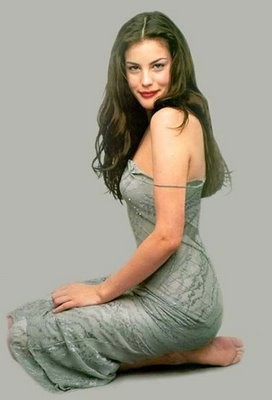 At such difficult times