The immigration from Ireland in the early 1800s placed many Irish in America, and across the globe. But the paths to assimilation and success were varied 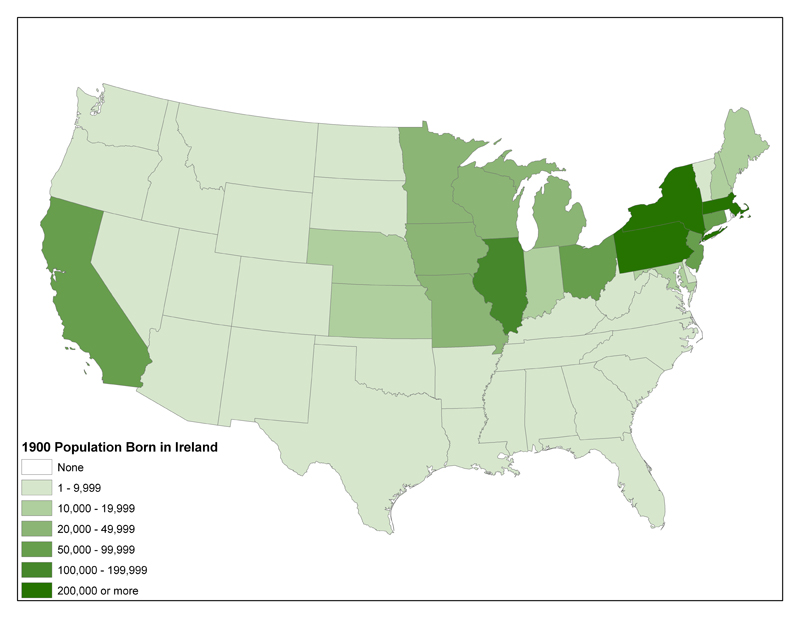 GO HERE for an animated version of this map from PBS, and similar maps of other American immigration waves.

Tis a difficult thing to recall how the Irish immigrants to the United States and other places were viewed with the typical contempt heaped upon other ethnic minorities in later eras. By my own lifetime, being Irish seemed no different than having ancestry from France, or Sweden, England or Germany. While the appalling bigotry aimed at African-Americans, Asians and Hispanics was still with us, I remained ignorant of the fact that it was not so long ago an Irishman suffered much the same kind of prejudice.

In the early 1800s the Irish in America were viewed by many as uncivilized and an inferior people, delegated to ghettos and expected to be suitable only for the most menial jobs. Basically they were the target of the typical treatment from those small-minded people desperate to exalt their own superior position by inventing artificial reasons to view anyone different as inferior.

And like free blacks, and later waves of immigrants from other locations, many Irishmen raised their lot through hard work and determination, to amass wealth and property and take their place among the heads of industry and government. Many others earned their way into mainstream citizenship the same way immigrants have done since the time of Caesar’s legions, by serving in the armed forces during times of crisis.

Irish brigades fought with distinction during the American Civil War, on both sides of the conflict, with many re-upping to fight and often die defending settlers during the years of western expansion that followed. The stereotype of the affable, strong as a bull “Mick Sergeant” lovingly portrayed by Hollywood actors like American Ward Bond and Englishman Victor McLaglen, showed men of rough beginnings who attained rank and respect through the crucible of war, to eventually don white parade gloves at the regimental ball, often with offspring destined to rise to the level of an officer and a gentleman.

Of course, when it comes to such waves of immigration, it is most often the lower, least education classes who are forced to seek passage to a new life in a new world, and work their way upwards. Those of land and letters had no need of such desperate measures, and the English speaking world has been greatly enriched by the collective works of the Irish writers. Some remained in Ireland, while others made their way to the great cities of the world as respected poets and playwrights, essayists and novelists. Johnathan Swift, Oscar Wilde, W.B. Yeats, George Bernard Shaw, Samuel Becket, and Elizabeth Bowen shall remain high in the pantheon of the greats, with many others that could be mentioned alongside them.

My mother’s maiden name is Murphy, but really they were Scots who settled in County Antrim for a time before making their way to the Southern United States.  But I retain a strong affinity for all things Irish, most particularly the playwrights and the music. In fact I shall be seeing Irish music tonight, on St. Patrick’s Day, at Freddy’s Back Room in Brooklyn, as I do most every year as a member of the Highland Shatners, who perform a mix of Celtic folk music, Paisley Pop, and even tunes from the original Star Trek.

So stop by for a Guinness if you are in the area.

And couple of Irish the day David Bowie died.