Skip to content
February 27, 2021
Arts and Culture / News and Commentary

A Peabody Award winning radio journalist, Trey Kay has many years of experience interviewing people of all walks of life for various programs on NPR and New York Public Radio. For his own podcasts produced for West Virginia Public Radio, he has focused his keen ear upon the opinions and experiences of those whose core beliefs have been affected by encounters with other people different from themselves.

In some cases they began in a hostile stance against members of their own communities, because of contrary points of view regarding issues such as gay marriage and progressive trends in public school curriculums and textbooks. But these same individuals came to be more tolerant and even friendly with others they first encountered as dogmatic enemies, once they came to know them as people.

“…Trey Kay’s pleasant manner and affable speaking voice has a calming effect, but his concern for his topic comes through clearly, as does his enthusiastic curiosity about the lives and outlook of other people, so that his monologs and interviews never acquire that typical NPR sedated talking head tone. And never does he seem to ask a question and be moving on the next while his recorder takes in their response. He listens and reacts, remaining very much in the moment, which is engaging for his audience, and those he is questioning….”

In May, 1796 an English country doctor, Edward Jenner, unveiled the smallpox vaccine, which provides immunity from the dreaded disease that caused immeasurable suffering for over a thousand years.

Various forms of inoculation had existed for centuries, which were crude and risked full-blown infection. But the vaccine, the very first vaccine of its kind, opened the door the end of many horrible diseases thereafter.

Sadly, many local populations choose to use the older methods, failing to accept the modern medicine that could saved millions more from suffering a death. As this Monday map shows, most of the world did not eradicate smallpox from their populations until well into the twentieth century.

Why don’t they just officially change the name to subway pains?

“The pains were so slow tonight!” “How long did you have to wait for your pain?” “I had to take 4 pains to get home!”

Ahhhh, how could I forget the Sunday Night Follies in the subway system? Watching it say the train is coming in 2 minutes, for 8 minutes and saying 1 minute, then disappearing off the board and never showing up. Delightful.

Perhaps that was a ghost pain, for the part of my life amputated and thrown away while waiting for pains.

While practicing in Prospect Park, a young mother left her spot on the Long Meadow and wheeled the pram containing her sleeping baby toward home.

I almost moved to another location when they arrived, and I had tried to play quietly, assuming they seemed a good ways off.

When she reached the paved walkway, she stopped at my bench and set what looked like a playing card next to me, saying it was just a note she wanted to leave with me. On the reverse were spaced lines, filled with handwriting that said:

“Thank you for playing the guitar so beautifully. It was an honor to listen to & I’m so happy I ended up in this very spot in the park so that your music could fill my ears.”

And she signed it with a first name and a little heart. Ah Spring….!

Same spot, a few days earlier. This is my office, whenever weather permits.

Ahhhh. Stripped off the lightest of my flannel sheets and replaced them with freshly laundered cotton sheets.

And now the sweet scent of ozone sinking through the troposphere from the impending spring thunderstorm provokes yet another ahhhhhh. Spring is in the air and great sleeping weather awaits.

When Ohio National Guardsman fired live ammunition at students protesting the war in Cambodia, 13 fell in the 13 second volley, 4 of them died. 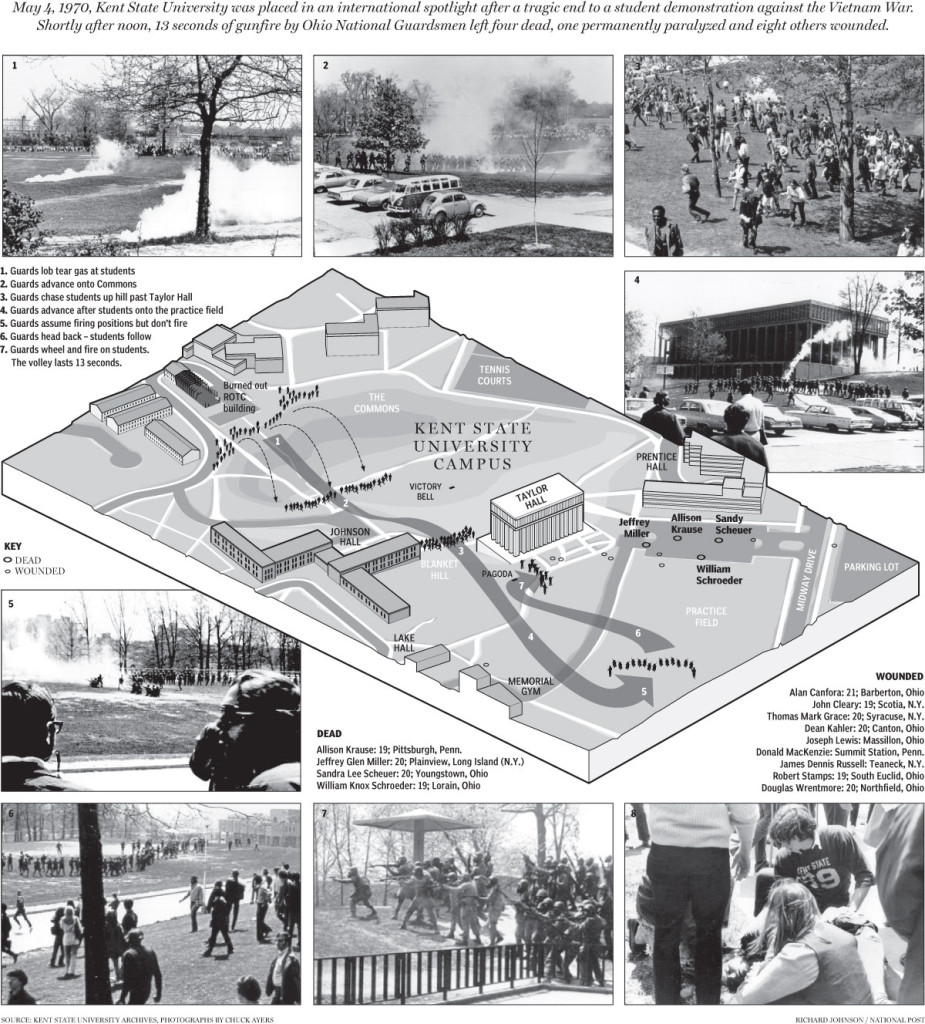 The action at Kent State University on May 4, 1970 forever changed how law enforcement and military authorities of the United States approach and deal with public protests, hostile mobs, and riots. While the social revolution of the Viet Nam era was cresting, in the long run, the horrific mistakes of that day led to a lasting revolution in non-lethal crowd control, preventing many more fatalities in the years to come, all the way down to the sad events in Baltimore in recent days.