So much for Family Values, here in the old U.S.A, Unbridled Selfishness of America, where Maternity Leave is denied too many 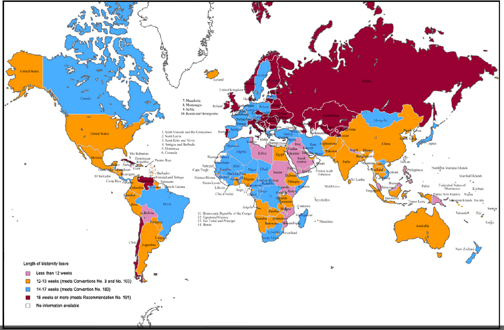 Greed Costs Us All

Here, in richest land the world has ever known, full of selfish people who rail against the government regulation responsible for decent wages and humane working conditions, and sold the baloney that having a social contract where everyone insures all our neighbors have proper healthcare, as in civilized nations, is somehow a bad thing, we have an appalling rank among the peoples of the world in child mortality, childbirth-related fatalities, and of course, providing proper paid leave for parents when their newborns need them most.

As per the excellent website geocurrents.info, we could learn a lot from the Finns.

“The United States ranks merely 30th in the Mothers’ Index, bested by such countries as France (16th) and Italy (17th), Canada (22nd) and United Kingdom (23rd), Israel (25th) and Belarus (26th). The relatively low ranking of the U.S. is based on several factors. One of the key indicators used to calculate the index is lifetime risk of maternal mortality. The maternal mortality in the United States is the highest of any industrialized nation: a woman in the U.S. is more than 10 times as likely as a woman in Italy or Ireland to die from pregnancy-related causes. The United States has the least generous maternity leave policy of any wealthy nation, both in terms of duration and percent of wages paid (except Australia, see the map on the left). Similarly, the U.S. does not do as well as most other developed countries with regard to child mortality. The U.S. under-5 mortality rate is on par with the figure of Bosnia and Herzegovina. Forty-one countries performed better than the U.S. on this indicator. A child in the U.S. is three times more likely to die before reaching age 5 than a child in Iceland, and twice as likely as a child in Denmark. Only slightly more than half of children in the United States are enrolled in preschool—making it the fifth lowest country in the developed world on this indicator. The United States also lags behind in regard to the political status of women: only 18% of its congressional seats are held by women, compared to 45% in Sweden and 40% in Iceland. Whether legislative representation accurately reflects the position of women in society is dubious, however, in light of such figures as 45% in Cuba, 39% in Mozambique, 31% in Guyana, 26% in El Salvador or Ethiopia, or 25% in Iraq.”