What became of the soldiers from the Great War who left behind the mysterious wishbones of McSorley’s Ale House?

According to the story on Atlas Obscura, there remain to this day, hanging over the bar at McSorley’s, wishbones placed there by servicemen as good luck charms prior to their being shipped overseas in 1917. Just one example of the amazing bits of history to be found at 15 East 7th Street in New York’s East Village, where McSorley’s Ale House opened in 1857.

The last American veteran  of the First World War was named Frank Buckles, who passed away in 2011 at the age of 110. He had been a 16 year old motorcycle driver “over there,” and in the 1940s he survived a Japanese internment camp in the Philippines during the Second World War, where he contracted the beriberi that continued to trouble him the rest of his life.

As we have now crossed the 100th anniversary of the start of the Great War, more attention has been brought to those who took part in what sadly failed to end all wars, as was predicted. They are all gone now, like the veterans of the American Civil War before them.

But what of the wishbone hangers? Some of the men came back to remove a wishbone and celebrate their safe return to McSolrey’s bar. What became of the others, whose wishbones remain there to this day, a silent reminder from the Lost Generation?

When next at the bar and ordering your mugs of light or dark, be sure and look for the wishbones and toast those warriors whose fate is now shrouded in history as well as mystery. 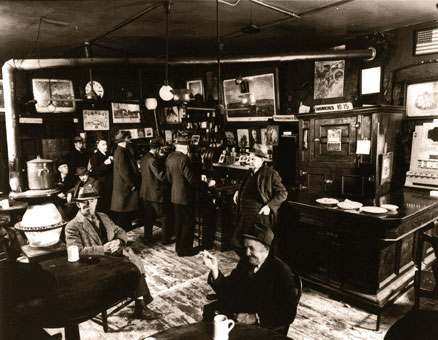 Thanks to River E. for the link!

Around the Web is a new feature where we will provide links to interesting and worthwhile items from around cyberspace.