A place to call home? The location of known exoplanets relatively near Earth appear in this map.

Exoplanets, or extrasolar planets, are planets orbiting stars other than our own Sun.

Someday the Sun will evolve into a red giant star, swallowing the inner planets. Our distant decedents will need to seek other worlds to inhabit before the Earth can no longer sustain life. Already, people are exploring which galactic neighborhoods may be most appealing.

A hi-res, poster-size version of this map is available HERE

On Wednesday the following image was released showing planets forming around a star, captured at the international astronomy facility in Chili, known as ALMA (Atacama Large Millimeter/submillimeter Array.) At 450 light years from earth, star HL Tau is approximately one millions years young. 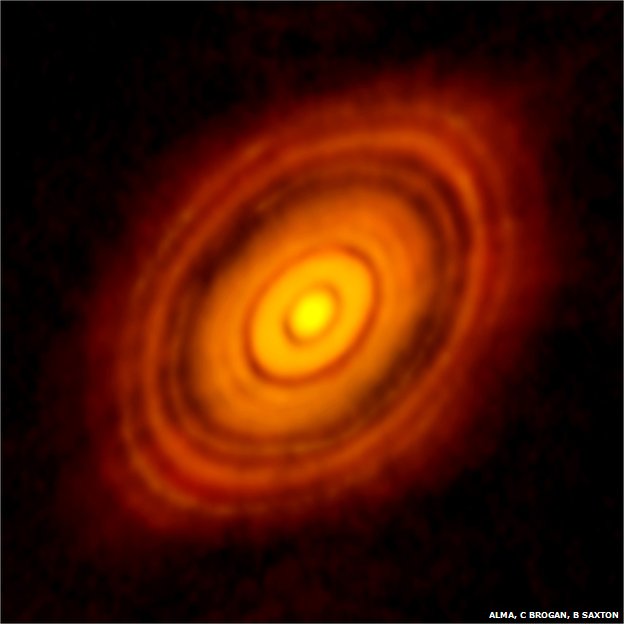 Never before has such a clear image of an accretion disc been captured, showing where definite gaps have been cleared by new planets, collecting material with their gravitational fields.

“When we first saw this image we were astounded at the spectacular level of detail. HL Tauri is no more than a million years old, yet already its disc appears to be full of forming planets. This one image alone will revolutionize theories of planet formation…”  – Catherine Vlahakis, Lead Program Scientist for the ALMA Long Baseline Campaign.

Verified reports of the initial exoplanets appeared in the journal Nature in 1995. At present over 1800 exoplanets have been discovered in over 1100 different planetary systems. Most of these are giant gas planets, like Jupiter. But many smaller planets have been verified as well.

The earliest finds were detected by their gravitational tug upon their home star, which “wobbled” slightly as the planet orbited around it. This technique was first suggested by astronomer Otto Struve in 1952. But it took another 40 years before the instruments required were perfected to accomplish the task. Many other methods of detection have been used to discover or confirm other exoplanets.

A survey by the Kepler space telescope of a small portion of the night sky has already identified a few thousands stars likely to harbor exoplanets. And that is but a drop in the galactic bucket.

NASA’s Quest for Another Earth page