Matt McPherson’s company has been making their very special guitars for over thirty years.

A pioneer of the offset sound hole, the location and relationship of the primary sound port to the supporting braces inside a McPherson were codified after considerable experimentation. 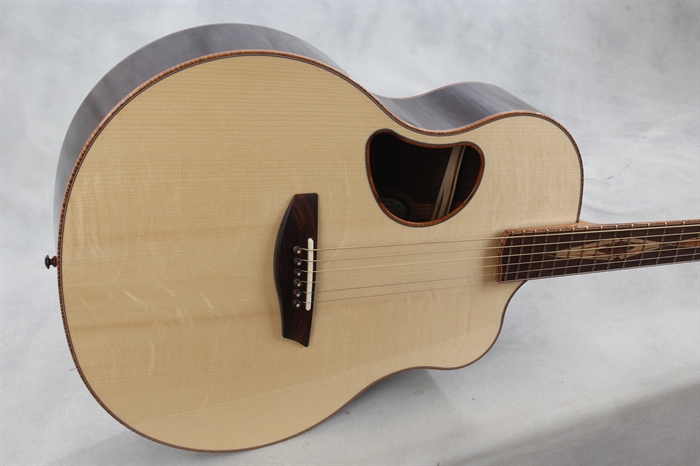 With top-self woods and hardware, each McPherson is built as a one-off creation, using a combination of state of the art machinery and meticulous hand tooling. No other guitar is quite like those made by McPherson, nor do they sound quite like other guitars.

The shape and sound hole placement may be the most obvious distinctions, but major differences from typical acoustic guitars are found in the bracing, the variable body depths, and where the neck joins the body.

McPherson uses an innovative version of X bracing. The top and back braces are parabolic in shape and have holes bored through the deepest part of the arch to reduce mass near primary junctions. The braces are three layer laminations, usually made from spruce on either side of rosewood. But sometimes the opposite configuration is employed.

McPherson bracing is unusual in other ways as well. No brace or tone bar contacts another.

Even at the center of the X brace, one strut is carved into the shape of an overpass, while the other is carved to dip underneath that overpass. And wherever a brace or tone bar encounters a lateral brace, a portal is provided so it passes through unencumbered. Any vibration passing along a brace reaches the terminus with little loss of energy.

As such, all braces act independently. But each brace is set into a track routed into a thin lattice made of spruce, which is glued to the underside of the soundboard, providing an integrated system that shares resonant vibration across the entire network.

Yes, the interiors really are this pristine, and yes, they really do inlay the McPherson logo on the inside of the guitar in pearl.

There are two flat, shallow tone bars that traverse the top. One is in front of the rather large rosewood bridge plate. The other is set at a slight angle across the lower bout. Both of these braces run through notches in the underside of the X brace.

Above the sound hole are two deeper parabolic traverse braces, each with a large space carved in the center. The first has the X bracing passing through open slots, and the second has smaller slots that allow the tapered ends of the X brace to pass through.

The four major back braces are rather large and round, and set at different angles. They are tapered at the ends to fit under the kerfing that supports the back. And each back brace terminates where there is a side brace, which lines up with the terminus of a corresponding top brace. The whole bracing configuration is designed to disseminate sound-producing vibrations across the tonewood plates, and to transfer resonant energy from one to the other as quickly and efficiently as possible.

Placing the sound hole off to the side allows the center of the soundboard to act like a highway for the bridge plate and bracing, allowing them to broadcast the energy coming from the strings out across the top’s upper bout just like the expansive lower bout.

The combination of this bracing network and sound hole placement adds up to a stereophonic sound, as tone emanates from different parts of the body, not just out of a center sound hole.

The McPherson neck is masterfully made and is as much a work of art as a functioning part of a musical instrument. It has a floating fingerboard, suspended over the top, similar to classical guitars or arch top guitars used for jazz music.

The upper bout is free from any damping or restrictions of any kind, and in combination with the offset sound hole, the movement of the tonewood top is unencumbered across the center of the instrument from end block to neck joint.

And while the neck looks like wonderful wood with a high gloss finish, there is much more than meets the eye.

McPherson uses a carbon fiber neck. I do not mean it has a carbon fiber rod inside it. It is mainly a large piece of military-grade carbon fiber, harder than used by other guitar makers, and twice as deep as the fingerboard or the two plies of thin wood that enclose it.

The neck block is actually made of wood that arches up and thins out to become the inner layer surrounding the carbon fiber. A layer of good-looking mahogany is used as an outside veneer. 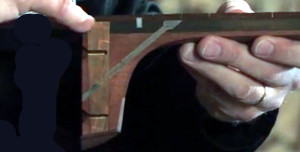 There is a large, tapered brass dowel set in the heel, perpendicular to the fingerboard, grooved and held in place with epoxy. It is also embedded into the carbon fiber, and a long steel screw is set through the carbon fiber farther along the neck, at an angle that sends it through the heel, and into the brass dowel, resulting in a triangular support design that maximizes rigidity.

The neck is attached to the body with two screws that go through an aluminum plate inside the guitar, where Belleville washers compress as needed to counter changes in humidity. And then the screws are seated into the brass dowel. This neck ain’t agoin’ nowhere!

McPherson guitars come in three basic varieties. The MG six string series and MG 12 string series, each with a lower bout of 16″, and the CMG, which stands for the Camrielle series of guitars that are slightly smaller and designed for more nuanced fingerstyle playing.

But where each model is 4″ deep at the the neck block, they can be made with a lower bout depth of anywhere from 3″ to 5″. Each McPherson may look similar from the front, but it is its own special instrument, even as all McPhersons differ from other guitars available today.

While tonewood combinations can be mixed and matched (they even make an all-carbon fiber model) and the end block depth can change any McPherson size from deep and bassy, to balanced and midrangey, what remains the same are the unique neck construction and bracing system, and the level of quality that makes each and every McPherson an heirloom-level investment for those who wish to take the high road that is less traveled and exceptionally rewarding.

McPherson Guitars on One Man’s Guitar