Eric Clapton and Hiroshi Fujiwara team up for another stellar Martin, the OM-ECHF Navy Blues 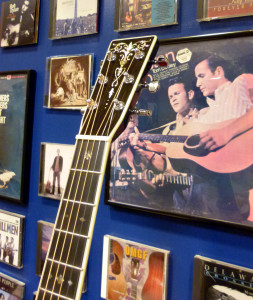 The inaugural Clapton models were a result of the trendsetting performance on MTV Unplugged, which Clapton taped in 1992, where he played a pearly 1939 000-42, and a second vintage 000, which had started its life as a 000-28, but had after-market pearl inlay added sometime later. Martin’s initial limited edition models relating to the Unplugged performance were their first scalloped braced 000s of the modern era, with several other vintage features, including a modified V-shaped neck. In time, Martin released the affordable 000-28EC, which remains among the most popular Martins in modern times, certainly where non-Dreadnought sizes are concerned.

The Clapton Fujiwara connection also provided Boak with the initial design for a short run of custom black 000 prototypes. Martin released it to the public as the “Bellezza Nera” (Black Beauty.) This was followed up by the “Bellezza Bianca” (White Beauty). The angelic white version was made out of maple with an Engelmann spruce top. That black version was Indian rosewood with Italian alpine spruce. The Navy Blues has a top designated as European spruce.

When I inquired with one of Martin’s chief wood buyers as to the specifics, I was told that regardless of what some Martin executives may have said in off the cuff remarks, Martin lists a spruce as “European” if the wood merchant cannot provide detailed information of its origin. Just like the “German spruce” of the late 60s and 1970s, Martin will know they acquired the spruce from a dealer in Germany, or Switzerland, etc. but the wood itself may have been harvested in any number of European countries.

So there is an air of mystery around this guitar, made all the more dark by the inky blue toner covering any telltale tracks. Regardless of the microclimate of origin, it is superb a match for Indian rosewood. The lushness and ring of each complement the other perfectly.

While the woods are similar to the Bellezza Nera, this particular Clapton-Fujiwara model is set apart by virtue of being an OM, or Orchestra Model. The previous Clapton models were 000s, and although they share the same body size and shape as the OM, the 000 usually has a short-scale neck, and 5/16” bracing, while a Martin OM has a long-scale neck and typically 1/4″ bracing.

I had a chance to ask why the new ECHF model was made as an OM, when I ran into Dick Boak at the Metropolitan Museum of Art. He said, “It was an accident.”

It has been 8 years since the last edition, and somehow, no one noticed until the prototypes were completed. In fact, Clapton and Fujiwara were unhappy with the particular shade of “royal” blue, and a second group of prototypes were made in navy blue, also as OMs. Dick was concerned as to how Eric Clapton would react when he took delivery of the guitar, or if he would even notice the difference in scale lengths. As Boak put it, “He was delighted! He loved the extra volume and projection so much that he called to acquire an extra prototype to use at the Crossroads Festival.”

That is quite a compliment, considering Martin and Clapton recently collaborated with Guitar Center for an exclusive run of “Crossroad” guitars. These were more traditional short scale 000s, like typical Clapton models with and inlaid Crossroads logo. And they were all excellent.

While the OM and 000 share the exact same body size and shape, they sound differently. The short-scale 000 with its 5/16” braces has a clear and punchy voice, but is a more intimate guitar in terms of dynamics. The OM has increased string tension due to the long-scale neck, which provides more resonant energy, and which, when matched with the lighter, more flexible 1/4″ bracing, leads to an increase in volume, projection and an expansive, open voice. And this adds up to the Navy Blues being one impressive powerhouse with a lovely personality.

The Martin model that has the most in common with the Navy Blues is the popular OM-28V, which was retired at the start of this year in favor of a revamped yet similar OM-28 (with Martin’s high performance neck and without the “V” designation). The Navy Blues and OM-28V necks are identical, as is the string scale, bracing, bridge plate, overall construction techniques and materials, and the Indian rosewood back and sides. Both models have Martin’s bold herringbone for the purfling inlaid around the top, but on the Navy Blues, the white ‘bone inlay really stands out from that dark and glossy blue.

The Navy Blues retains the response and dynamics of the OM-28V as well. Abnormally versatile even by Martin standards, each guitar has considerable power under the hood for a chassis of this size. Both instruments have that complex Indian rosewood tone, which I often refer to as smoky, since there is a presence or thickness in the audible air of a sustained chord, like smoke suspended in a sunbeam. The top on the OM-28V (and new OM-28) is made of Sitka spruce from the Pacific Northwest. The tonal pallet of the Navy Blues is therefor enhanced by the European spruce, which provides a bit more complexity and dynamic range.

There is a wonderfully throaty roar down in the furnace of the Navy Blues, under the bottom end, which makes it sort of a mini-Dreadnought, in this respect. And as with all great OMs, the fundamental notes are fat and distinct, standing out as that warm cushion of rosewood undertone swells up and out around the top voice. And the notes off the unwound treble strings are strong and full, yet very pure, with abundant harmonics.

The voice has that warm, soft-focused glow around the bass and mid-range notes one expects from European spruce, and there is a delightful prettiness to the trebles during sweeping strums. It is vibrant and chimey while remaining warm and cheerful. At times full, six-note chords with some unfretted strings have the depth and complexity I remember hearing when I sent a resonating strum across the many strings inside a piano.

But it is the headroom and the wide and powerful range of dynamics that focus a player’s attention. It is dark and muscled when played hard, lush and lovely when played lightly, with sparkling sprites over top of each, and all of it turbocharged a bit, compared to typical Clapton models, due to the long scale neck and 1/4″ OM bracing.

The Bold and the Beautiful

The bold white herringbone trim is set off by a rosette filled with a ring of notched diamonds made of pearl. The fingerboard is also dressed up smartly in abalone, with the full snowflakes, diamonds, and cats eyes pattern seen on the original OM-45s from the early 1930s. But the pedigree of the ornate “alternate torch” gracing the ebony headstock plate dates from farther back in time, and the very first Martins made in Style 45. The same fancier torch appears on all the ECHF models, as well as some other special Martins, including a few custom guitars commissioned by Dick Boak, after he discovered that the original inlay pattern for the “modified torch” design had been deferred in favor of the simpler “torch” inlay in 1902.

Some guitarists will be drawn to this model because of its unusual blue body and silvery white appointments. Others will not be drawn to it for the same reason. But what will make someone walk out of a guitar shop as the owner of a new OM-ECHF Navy Blues is how it feels and how it sounds. It impresses from the first strum and only increases the seduction the more one plays it. This guitar is indeed one boldly beautiful, delightful dark charmer with pleasing complexity and powerful versatility.

The list price on this guitar is $6,999. Call your local Martin dealer to find out the real price.

I know several people who have already placed orders for one of these guitars. And they are limiting the run to 181 instruments in total, each with an interior label numbered and personally signed by Eric Clapton, Hiroshi Fujiwara, Dick Boak and C. F. Martin IV.

So, if you want to play your blues on a Navy Blues, don’t wait too long, or you may be left singing the blues about the one that got away!

And that is one man’s world on… 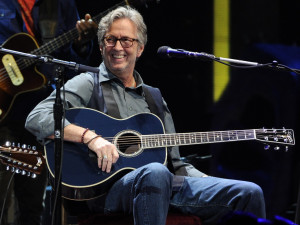 Other Options:    Available left-handed at no additional charge