Each is my personal guitar, and the guitar sale is out of need

THERE ARE CURRENTLY NO GUITARS FOR SALE

This wonderful musical instrument started out as a 1966 D-28. The ruined Sitka spruce top on its 53 year-old Brazilian rosewood back and sides was replaced with a marvelous Adirondack spruce top, which was planed to pre-war thickness and given “tucked” forward-shifted bracing identical to a 1937 D-28, using traditional hot hide glue for all joinery, including the new neck joint, fretboard, etc.

Here’s why this guitar is worth the asking price:

3. You have to wait a year or two for the work to be done.

4. You can’t actually get this done by the same retired Martin Guitar luthiers who converted this guitar. They no longer accept conversion commissions.

5. This is as close to having pre-war D-28 with a comfortable modern neck than you will find anywhere else on the planet.

The Best Men in the Business

The work is by Dave Strunk and Rich Eckhart, two retired Martin Guitar luthiers who have their own business called Brothers Music, in Wind Gap, Pennsylvania. I have played conversions from all the major practitioners of the art, and nobody does it better.

Dave worked in the Martin’s Repairs Department for 21 years and was on the small team that developed and built the original D-18 Authentic 1937 model before training the Custom Shop personnel in the techniques required to build the later Authentic Series instruments.

Rich spent 15 years at Martin and is the perfectionist’s perfectionist in everything from kerfing to ultra-thin, hand-sprayed lacquer finishes like the one on this guitar.

They primarily did Brazilian Martin conversions to Style 45 and Style 42. This was their first Brazilian D-28 conversion to pre-war specs, of the few they completed. Every time Rich Eckhart plays this guitar he says, “This one is special.” He is genuinely proud of how it turned out.

Unfortunately, they stopped taking conversion work as they are too busy doing the vintage guitar restoration for Fred Oster’s Vintage Instruments in Philadelphia and private clients such as Warren Haynes. And still they have about a two-year backlog on the commissions they did accept.

The one-piece Big Leaf mahogany neck on this instrument was hand-carved by Dave Strunk to my specifications. It has a non-V shape similar to Martin’s Low Profile, yet with a bit more mass, so it does not feel as “skinny” at the 1-11/16” nut as the Low Profile Martin dreadnoughts. But it does not attain the girth in the upper frets of the older Full Thickness necks.

It has the modern two-way adjustable truss rod invented by Leslie Mammele at Martin and even has an actual Martin script logo on the Brazilian rosewood headstock, along with Waverly tuners.

The conversion to 1937 Style 28 specs included grained ivoroid bindings, wood fiber top inlay, abalone diamond fret markers on the ebon fingerboard, and a Zig-zag back strip and vintage replica ebony bridge with long bone saddle, and the 1939 2-1/8” string spacing to go along with the 1-11/16” width at nut.

My Loss, Your Gain

I am selling this Brazilian rosewood/Adirondack spruce dreadnought with “authentic” 1937 bracing and a comfortable modern neck for hardship reasons, and very much hate to do it. But “one who cannot cast away a treasure at need is in fetters.”

This is a guitar a player gets lost in, as the inner space is deep, vast, full of ethereal, colorful Brazilian rosewood complexity, rich yet articulate, with the pure violin-like notes of a Martin made with a hand-fitted dovetail neck joint, brought into exquisite detail by the high-resolution focus of an Adirondack spruce soundboard, with light, flexible pre-war bracing that has the bridge plate and tone bars tucked under the X-brace, which is tucked into the side kerfing, for optimum energy transference from the strings across the entire soundboard and into the 53 year-old Brazilian rosewood sides and back. And from the spider webbing figure in the rosewood, it is obviously much older than that – and all of it under ultra-thin lacquer finish that allows for optimum reverberation and resonance.

It is in excellent condition, with very minor surface scratches here and there, and one small “ding” next to the fretboard extension that mysteriously appeared when I got the guitar back from the Brothers after the recent fret dressing. It’s on the treble side, so you don’t see it when playing it.

Here is a new video from May 2019, created with the microphones and mic technique I am currently using when recording videos of Martin guitars at the Martin Factory.

Madagascar rosewood; Adirondack spruce; Vintage Style 42 appointments with Style 45 torch headstock inlay; Fishman Gold Line Plus undersaddle pickup with Volume and Tone controls inside sound hole. Conceived as an elite, versatile guitar combining the aesthetic of a 12-fret 00-42 from the 1920s with a 1930s 14-fret OM, plus deeper sides for a larger sound chamber and some of the extra volume and bottom end similar to 12-fret Martins while maintaining the advantages of the classic OM design.

This is the last of my traditional 1-3/4″ neck guitars. I have listed it before but always balked at selling it. But my aging football injuries make it too hard to play pain-free these days and with that, coupled with the success of my custom TSP model with a short-scale 1-11/16″ neck, I am finally selling this for real this time.

This guitar was made to be played in concert and was reserved for my higher profile performances back when I was leading my own band. So, it was used a lot and did a lot of traveling.

But it actually has very little playing wear for a 9-year old guitar (I recently paid $90 to have it polished at the Martin factory.) It does have some marks around the sound hole. Mysterious marks, which former Martin repairmen have said were under the finish and discolored over time, and should be covered by the warranty. Martin disagreed. But I would not want to refinish this guitar anyway, and risk ruining the glorious voice.

It also has some finish checking (ultra-fine spider web cracks in the nitrocellulose lacquer finish.) They are only on the top, here and there. And usually impossible to see or even photograph unless seen at an extreme angle in bright light. These are caused by the fluctuation of the soundboard, or can be caused by an expansion and contraction of solid tonewood due to changes in humidity. That is why most vintage Martins have lots of finish checking. This is minor, but still may matter to someone looking for a blemish-free 42.

These wear and tear results can be seen in the photos from 2019 included in the main photo album, which goes along with my review of this instrument, which appeared in 2013 and was updated in May of 2019. The 2019 photos are at the bottom of the gallery.

You can read the review HERE.

SOLD – $4,200 – 2007 Martin Custom Shop 000C-28M – Madagascar rosewood, Adirondack spruce top and 1/4” Golden Era style Adirondack spruce bracing, Fishman Gold Line Plus undersaddle pickup. This has been my regular performance guitar for years, so it has basic playing wear. And it has a bit of buckle scratches from when I was playing a benefit concert and was asked to let a guest artist use it, who had an Ole Opry worthy belt buckle.

I designed it to look like an OMC-28 Laurence Juber model, but it is a short-scale guitar and has flamed maple binding. Laurence played it and liked it well enough. But not enough to go short-scale himself.

Also, this is the very first Martin guitar ordered from the Custom Shop with Madagascar rosewood back and sides.

I was meeting with Tim Teel on the morning of Winter NAMM 2007, for a face to face tour of the new Martins, when I asked if they were going to release Madagascar rosewood for Custom Shop orders (the Madagascar Juber model had come out the previous summer.)

Tim said he didn’t think so, and asked an employee to fetch Bob Fehr. Bob gave me that, “Now what?” look, and then I asked him, “Now that it’s January, can I order a guitar with Madagascar rosewood?” Bob looked at Tim who looked at me and I looked at Tim and back at Bob, and Bob took a little jotter pad from his breast pocket, and a pencil from behind his ear, and replied, “Well, what do you want?”

What I wanted was a short-scale Juber with 2-5/16” string spacing and flamed maple binding. By the time we were done horse trading, it had the GE bracing and GE neck shape, which I find more comfortable than the standard Modified V shape.

Or I did. I have converted back to 1-11/16” Low Profile necks due to my aging high school football injuries. It is delightful, but detrimental to the continued disintegration of my wrist/thumb connection. 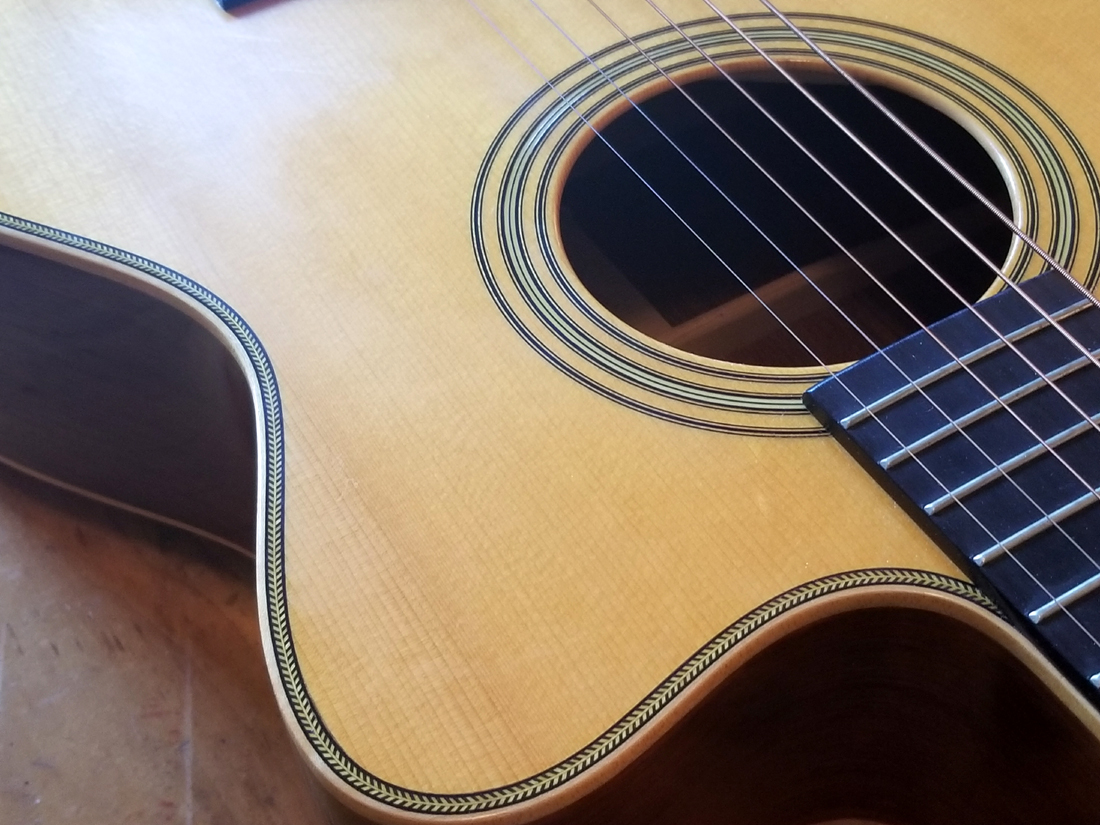 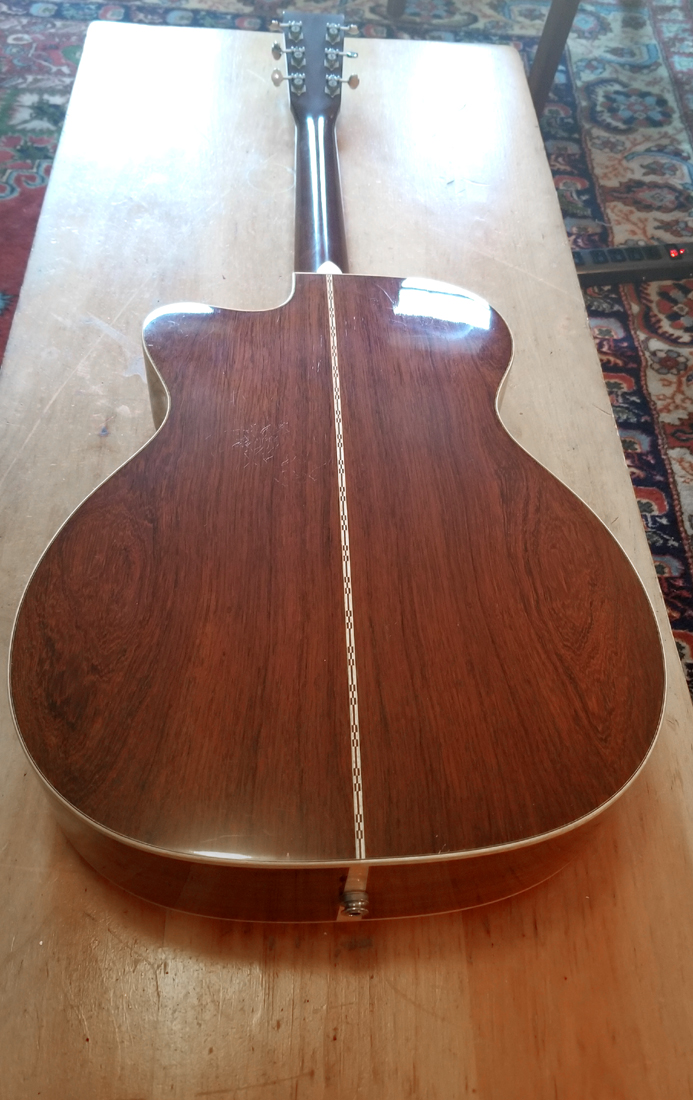 This is one of the finest-sounding modern Martins I ever played. I used it on more than half of my recent album Lost and Haunted Ways, because it just records SO WELL!

I had always regretted selling my first one, when I was offered the first Schoenberg Soloist made with pearl trim, and I could not afford to keep both. And when I had some cash I went looking for another Juber, and bought this one from a small-town preacher in California, with the pickup and strap button already installed. So, it was basically “used in church” before it came to me.

But my dilapidated fretting hand just cannot take V necks any longer. I had my custom 000C-21 TSP made to replace it and the time has come for that to happen. 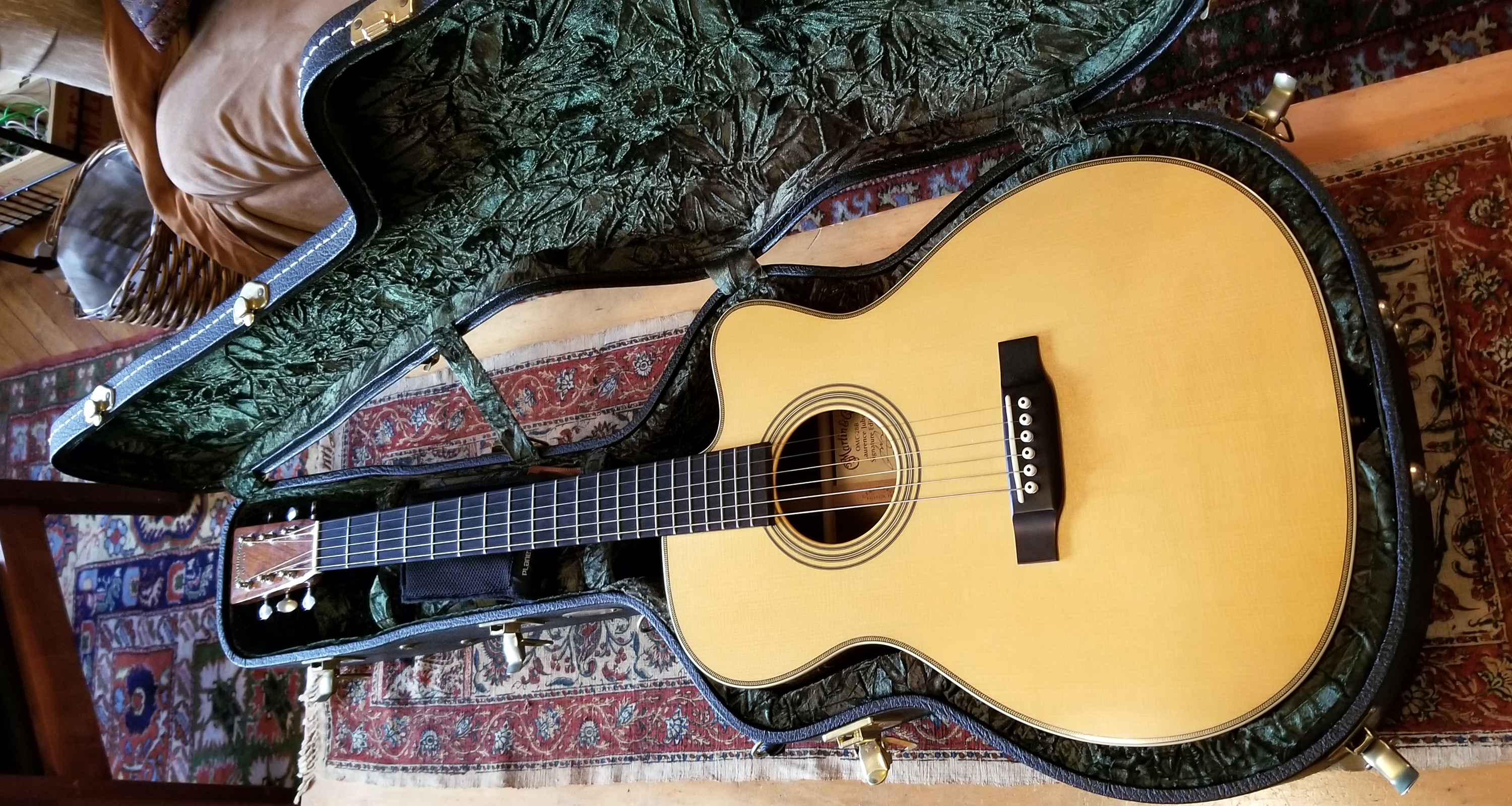 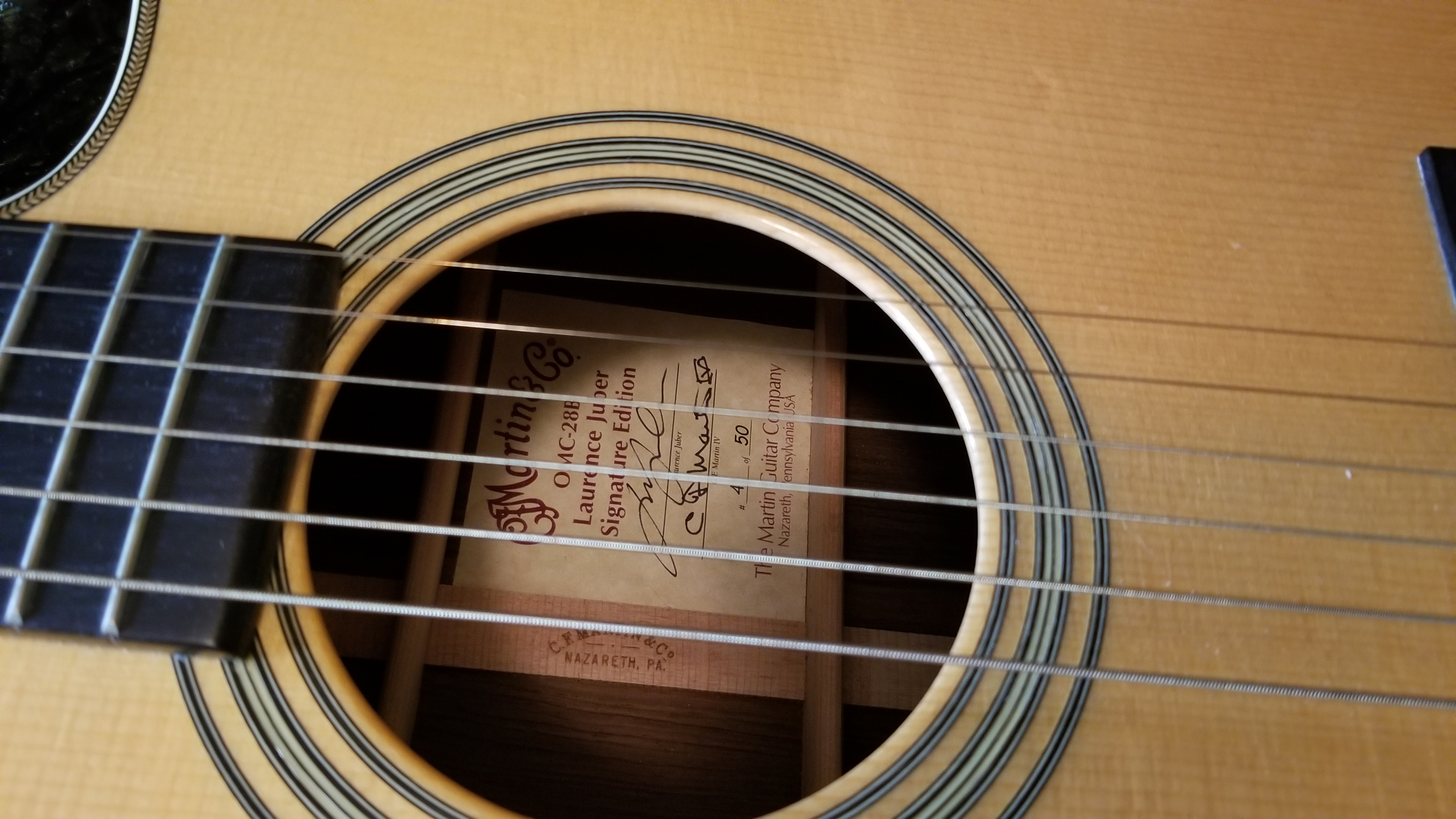 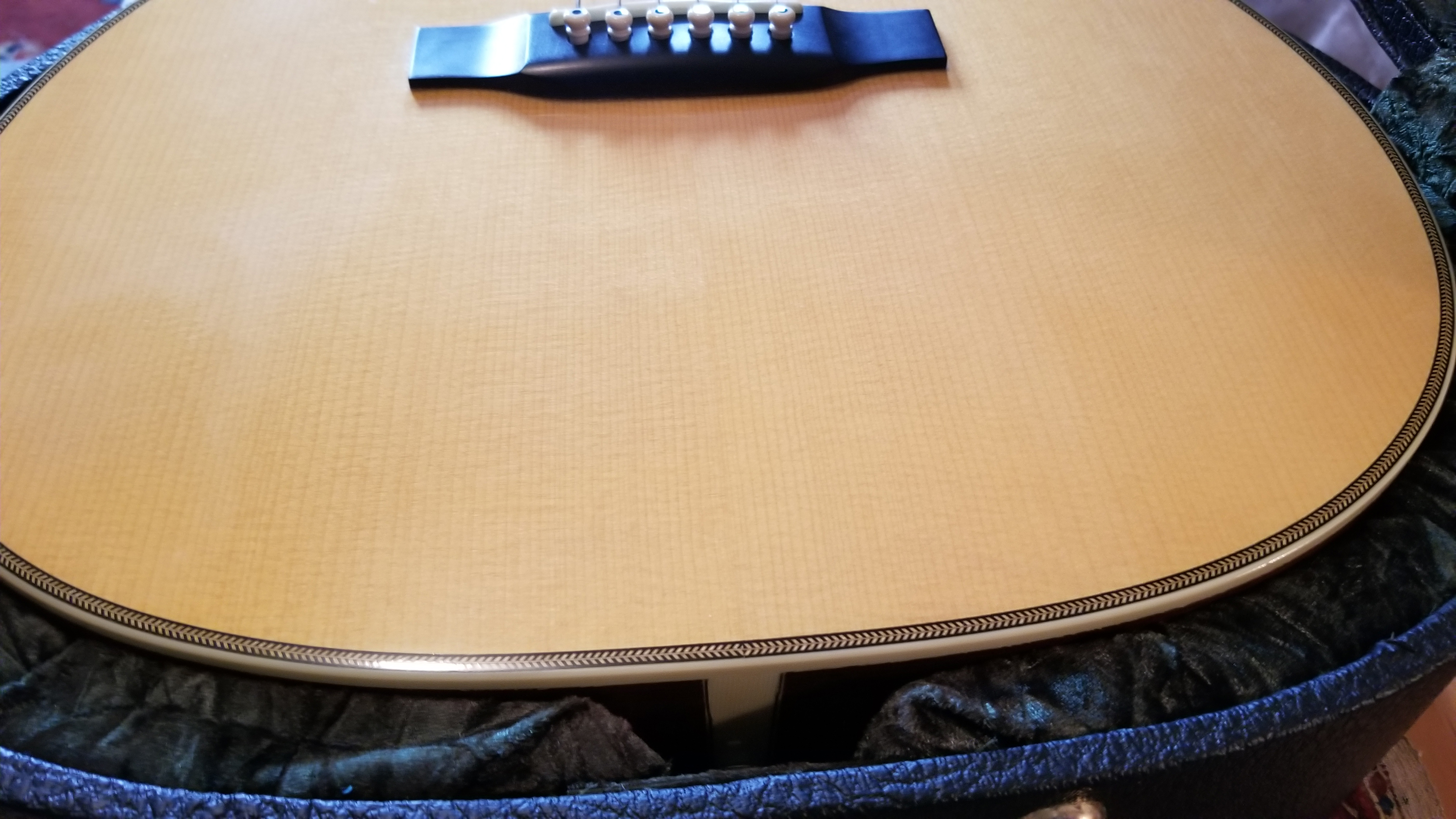 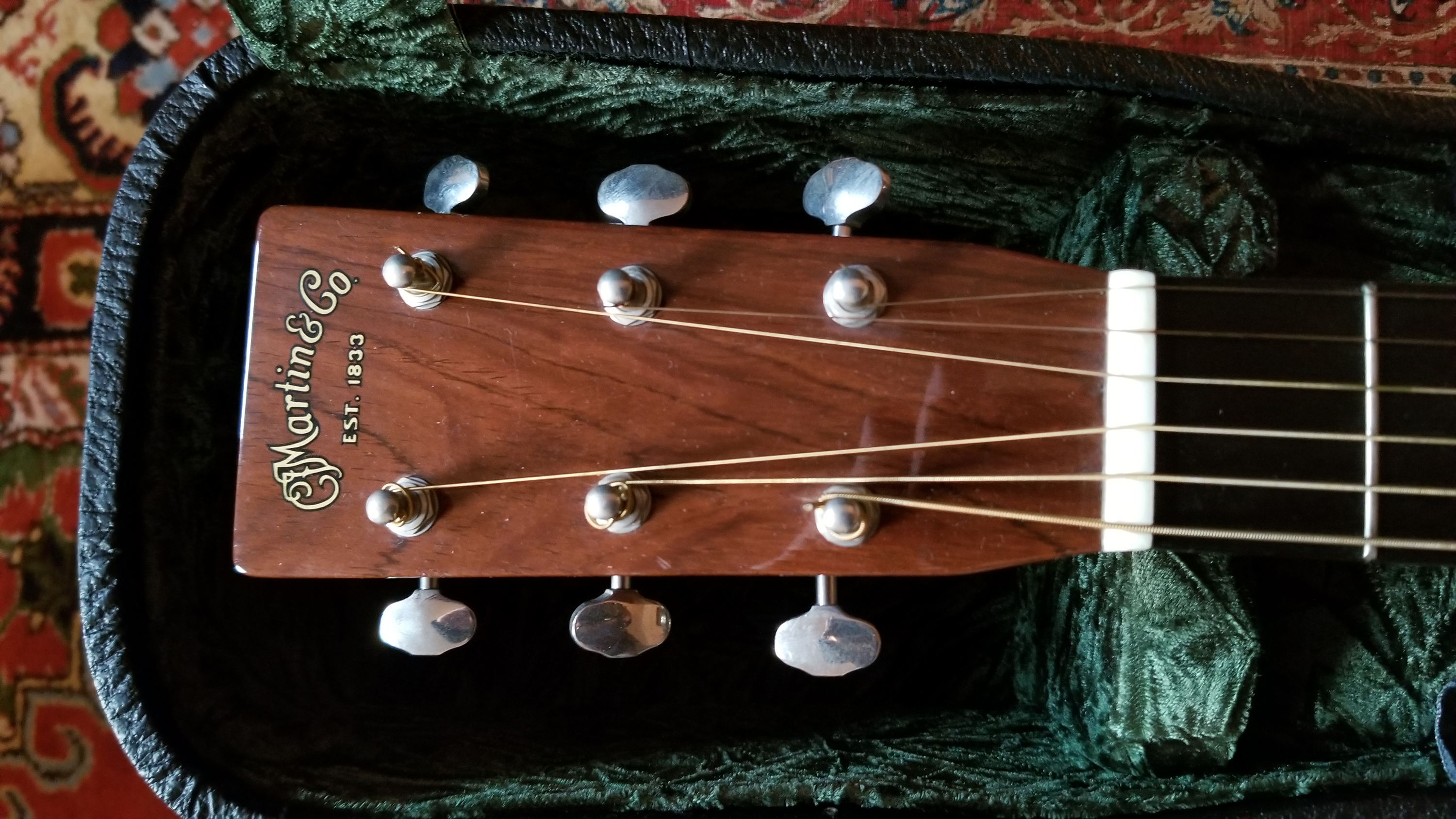 I ended up selling that Schoenberg to Chris Martin, which financed my Madagascar rosewood custom, above, which is also being sold for the same reasons – 1-3/4” V necks are bad for my health. I just played it again today, and it makes me sad as it sounds so freaking good.