Amazing detail created out of Rubber for the D-Day Landings

Utah Beach down the individual house

On June 4th, 1944, the day before the original date set for D-Day, a 27 year-old U.S. naval officer stood before this Top Secret three-dimensional relief map  and nervously briefed the top brass of the allied armies, on the upcoming seaboard assault at the Normandy coastal areas code named Utah. His audience included British Field Marshall Montgomery, commander of the entire sea and land assault (Operation Neptune), and American General General Eisenhower, Supreme Allied Commander for the European Theater of Operations.

At that the time it was a brand new technology, created in secrecy and kept that way until after the war had ended. Made at Camp Bradford, Virginia, and completed less than three days before it was flown to England, it was derived from stereo photos taken from reconnaissance planes. The map then went aboard ship after that first briefing, where it was used to instruct of the U.S. 4th Infantry Division that would be making the assault.

That officer was Charles Lee Burwell. He held onto the map and in later years donated it to the Library of Congress. He is quoted as saying he felt it was an important technology, because the 3D aspect of the map allowed soldiers to better know where they were going and what they should expect to see there, in terms of buildings, trees, and hedgerows. 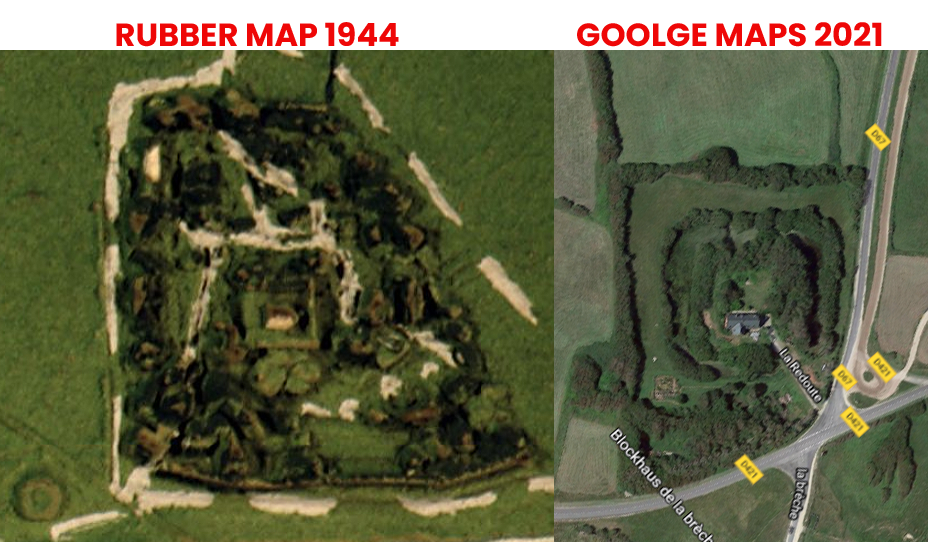 The map consists of two halves, each 4 feet square, made of rubber on top of foam. The numbers on the map correspond with other more traditional maps developed for the invasion. Up close, it reveals tide lines, slope of the beach, buildings beyond the beach, and the location of anti-landing craft hazards known as Czech hedgehogs. The depth of the water is represented by bathymetric tints and the color of the land was approximated from black white photos.

This traditional map is code named Bigot, which was the highest level of secrecy possible. Many thousands of lives depended upon the success of the operation – millions in fact, if one considers those suffering and dying under Nazi occupation. Like the rubber map, this tactical map was created in two sections. This one shows the extreme left of the Utah Beach area, but it includes the actual invasion location.

This detail below shows photographic representations of the waterline view of the coast represented on the map. These photos would have been taken from midget submarines with a crew of two, and sometimes four men, at great risk to their lives. These British sailors were among the relatively unknown heroes of D-day.

A Wrong Turn with Destiny 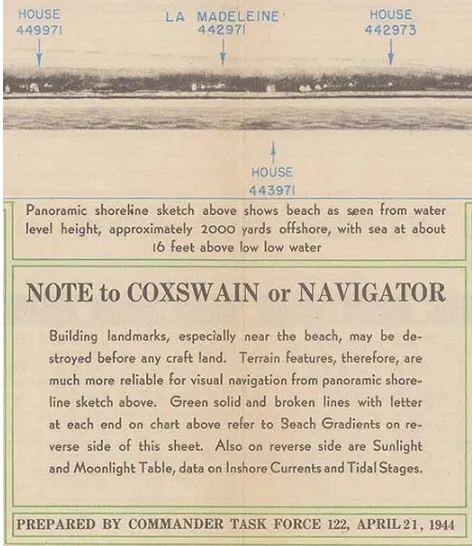 The small inland hamlet of La Madeleine is pictured to the left of the Utah landing areas, code named Uncle Red and Tare Green (designated as Red Beach and Green Beach in the map above.) But the strong tidal currents forced the landing craft more and more eastward, so they actually landed at le Grande Dune on that fateful morning.

Although the First Wave arrived in the wrong place, their commanding officer, Deputy Division Commander, U.S. 4th Division, Brigadier General Theodore Roosevelt Jr., famously decided to start the war from there, and reinforcements were directed to land at his location. This inadvertently saved many lives, as first assault waves would have encountered greater and more deadly resistance had they landed where intended.

Not that they were not subjected to genuine peril. General Roosevelt was put in for the Distinguished Service Cross for his gallantry on D-Day. He lied about his poor health to insure he would be allowed to lead the First Wave, and then repeatedly led troop concentrations off the beach and toward their various objectives, while often under heavy fire from mortars and small arms. After he suffered a fatal heart attack in July, while still in the field, his decoration was upgraded, and he received the Congressional Medal of Honor, posthumously.

Here is an overlay I created, with a strategic map for the 8th Infantry Regiment, U.S. 4th Division, superimposed over the rubber map from 1944.

By early afternoon, elements of the 4th Infantry Division had moved inland and linked up with elements of the 101st Airborne Division. By the end of D-Day, 23,250 troops and 1,700 vehicles had been safely landed on Utah Beach. Casualties were relatively light on Utah Beach. However, this was due in part to the inland actions of the 13,000 Airborne troops who suffered heavy losses. The 101st Airborne Division lost about 40% of its forces on D-Day.

The above table was found at someone’s personal travel website, https://cromwell-intl.com/travel/france/normandy/utah-beach.html

And here is a portion of the rubber map superimposed over a Google map of the same area. Note that just beyond the top of the rubber map is found the location of Brecourt Manner, where elements of the U.S. 101st Airborne destroyed a battery of four 105mm cannon that were firing on the troops at Utah Beach, as made famous in the 2001 HBO miniseries Band of Brothers. This shows just how accurate and detailed the rubber map is and how invaluable it must have been to the success of operations on and around Utah Beach on D-Day and afterwards.

Aerial photos from that “day of days.” 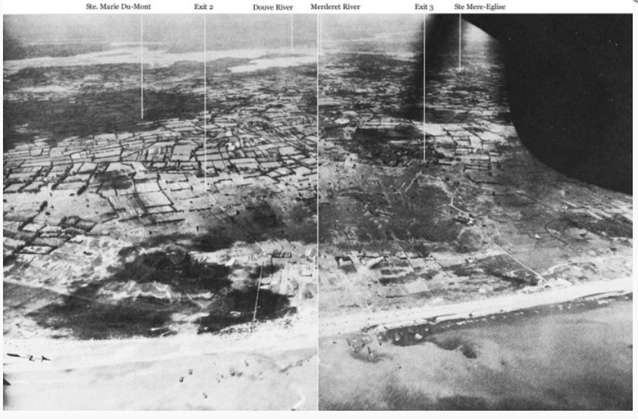 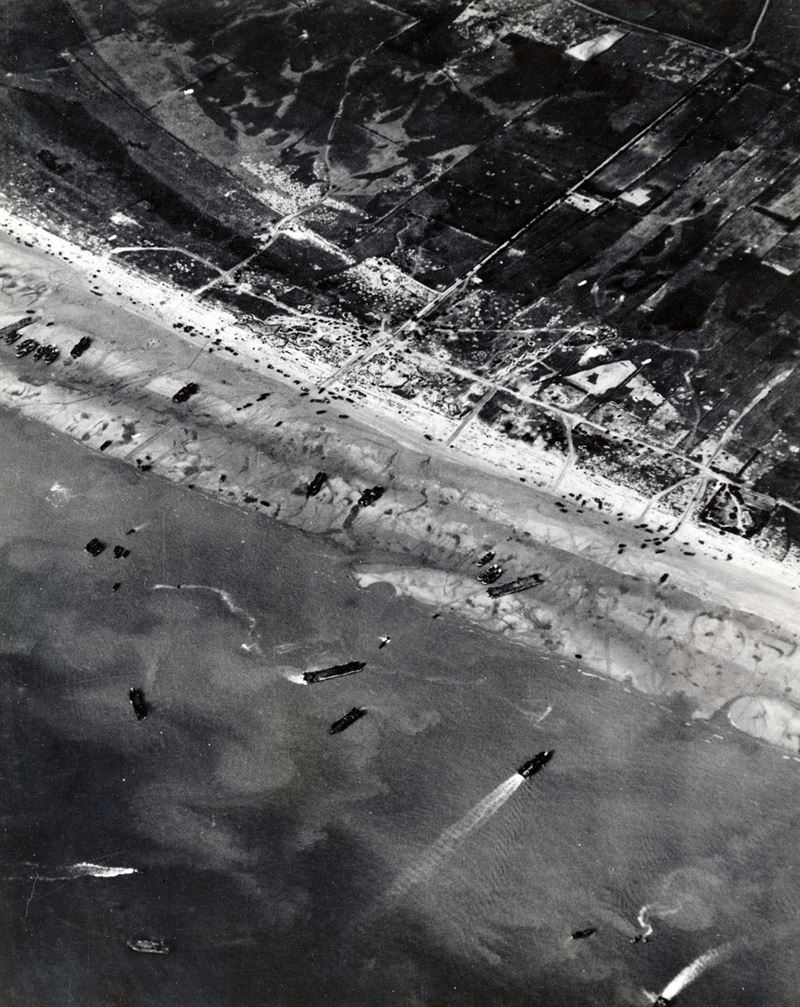 The American Memorial at Utah Beach

The Railroad that Helped make the USA One Place

One-hundred and fifty-two years ago today

The “Last Spike” connecting the Union Pacific and Central Pacific Railroads took place on May 10, 1869. It took seven years from the time Congress approved the creation of a Transcontinental Railway in 1862. But it was being planned and discussed for decades beforehand.

Construction began in 1863, as the horrendous Civil War tearing the nation apart. But just as the war changed the USA from being a bunch of separate states into nation indivisible, the transcontinental railway unified the nation geographically. According to one university history site, before the railroad’s completion, it cost approximately $20,000 in 2021 money to travel from St. Louis to San Francisco by stagecoach. Afterwards the price was a fraction of that cost, and continued to drop as more rail lines were completed off of the original route.

Talk of such a project goes back at least to 1830, when the first steam engine locomotive arrived on this side of the Atlantic. In 1845, the adventurer and businessman Asa Whitney petitionedCongress to provide land grants necessary to create a railway across the northern swath of America, to Oregon Territory, where he had already made a fortune trading with the Far East. Evoking the spirit Lewis and Clark, Whitney commissioned this map to entice investment in his grand scheme.

Thirty years later, it was other entrepreneurs who realized this long outstanding dream. But there were many competing propositions as to where exactly the route should end up, as seen in this map from the early 1850s.

Even after the two companies received the go-ahead, work was nearly completed and the eastern Union Pacific Railroad Company and the western Central Pacific Railroad Company still could not agree on where the their routes should meet. Maps from the time show all proposed routes running south of Utah’s Great Salt Lake. Eventually the government under President Grant threatened to withhold further funding until the two companies came to terms as to exactly where they would join together to create the single route from east coast to west. And it ended up being Promontory Summit, Utah, north of the lake.

Despite the Central Pacific having to cut their way through the mountains, and the harsh working conditions of their laborers, including many Chinese immigrants, it was the Union Pacific that suffered the greatest loss of life. Many hundreds died on both sides, from accidents, exposure, disease, and attacks from Native American tribes, who couldn’t quell the tied of westward expansion that ultimately led to formation of the lower 48 states as we know them today.

Here is another map, from 1882, of a proposed southern route that didn’t end up being created as envisioned.