Someone over at the Unofficial Martin Guitar forum posted a link to the fabulous site Euratalas.com whence comes the latest Monday Map, showing Europe’s political situation in the year 1 A.D.

This cool map and the one below are found in a section entitled History of Europe, featuring similar maps from every hundred years since Year 1. 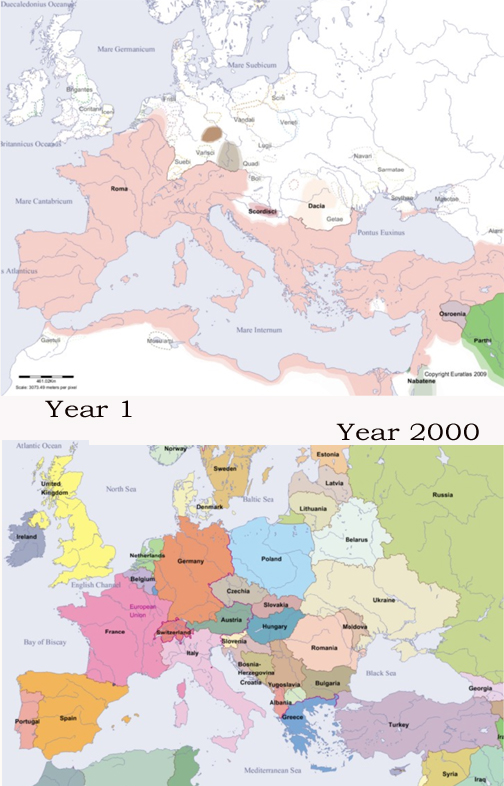 This is just one part of a site that is wonderfully immersive and educational. In addition to maps of Europe, including those from antiquity, there is a section on world history, North America, the Middle East, and so on. There is also a shopping section where various maps and other items are available for sale!

Monday Map showing how the name of European nations, when translated literally from Chinese, according to Haohao Report, can be rather amusing.

What’s In A Name?

Some leeway has been taken here, since certain Chinese characters can have more than one meaning, depending upon usage and dialect. Also, when naming countries for maps, the Chinese would often choose characters that sounded close to the syllables used to pronounce the official name of the country in question. For example the official name of Spain is España, which in Chinese became Xi Ban Ya, or “West Class Tooth.”

This brought to mind a question I have posed for many years, why don’t we call Germany Deutschland and a German Deutsch?

A German by any other name would be as Deutsch

I know why we call Germany Germany; it comes from the Latin germanicus, which was used to describe the tribes in that part of the world during the Roman Empire.

That is not a very satisfying answer, considering we have had a thousand years to figure out what a place is actually called. It has been 200 years since Deutsch was offered to the world as the official term of national identification. But we keep right on with this German nonsense.

Sometime around Nixon’s visit to China we were suddenly asked to start calling Peking by its more accurate pronunciation of Beijing. In less than 20 years it became second nature to use the correct name. Why can’t we do the same with Deutschland? After all, we call Finland Finland.

But then, its name isn’t Finland, is it? It is Suomi.

It just seems arrogant to me, or at least rather lazy in this information age to expect a Svenska person from Sverige to come to America and continually say “I am Swedish from Sweden.”

I understand that certain languages make it rather difficult to master the actual name of well-known countries. But many of the names we use are no less absurd than those on the map above. However, if we followed the Peking to Beijing model, with schoolchildren taught the proper names at an early age, reenforced by the New York Times and other sources of record, it probably wouldn’t take all that long to adjust to calling our friends and neighbors on the planet by their actual names, instead of “You from that place I don’t know how to pronounce.”

Here are the names of European lands, according to themselves. Some use symbols and characters we do not. Sometimes their spelling actually sounds like ours. But in many cases we come nowhere near the mark.

Bosnia and Herzegovina   –   Bosna i Hercegovina

Scotland   –   Scotland – the Scots name, Alba is the Gaelic term

Switzerland   –   Helvetica – official name that avoids favoring one language over others.

The most common surnames by European nation, are surprising.
Monday Map

Sure if my mother’s maiden name isn’t Murphy 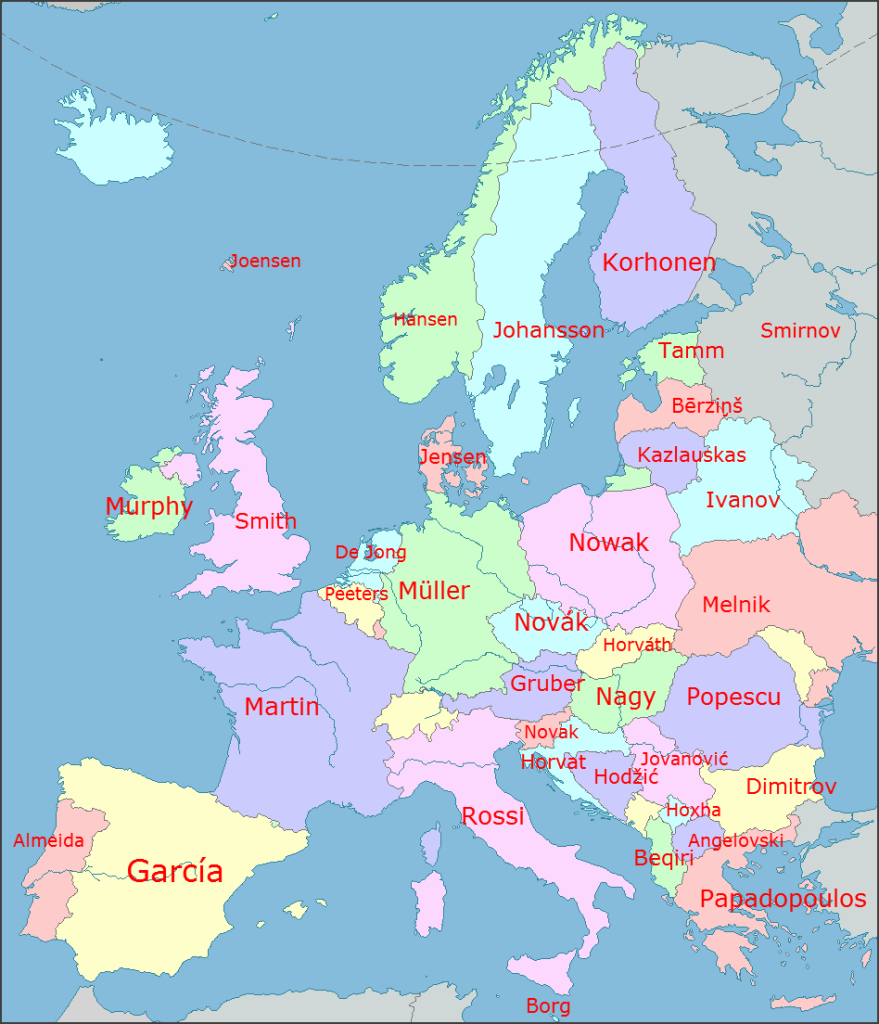 This week’s map does not the whole story tell, however. For one thing, I find it fascinating that in Iceland they retain the ancient custom of a last name simply denoting who one’s father is (or mother in some cases.) Where having the English name Johnson once meant you were the son of someone named John, in Iceland a last name of Jónsson literally means your father’s first name is Jón. While everyone with last names starting with O’ or Mc or Mac, or with any number of endings, retain the vestiges of this custom, in Iceland it holds fast as the way things are done.

But when it comes to places that do use modern surnames, there are many of them with multiple spellings. As laid down in an interesting forum discussion on Reddit, prompted by the posting of this map, someone suggests that the most common name in Germany would be Schmidt, if one considers all the various spellings such as Schmitt, Schmitz, or Schmid. And that this may have disqualified many other common names with divergent spellings.

And that reminds me of my dear college chum Diane Muldrow, who has at times been affectionately referred to by more than one of her friends as Diane McMacO’Muldrowskisteina.

As it happens, Diane’s latest book, Everything I Need To Know I Learned From a Little Golden Book reached Number One on the independent bookstore Best Seller List last week. 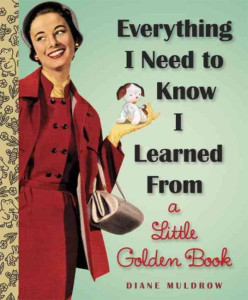