This could happen in our lifetime: Los Angeles Bay

Artist’s deception of what a near-future Los Angeles, California was like before Climate Change melted all the world’s major glaciers 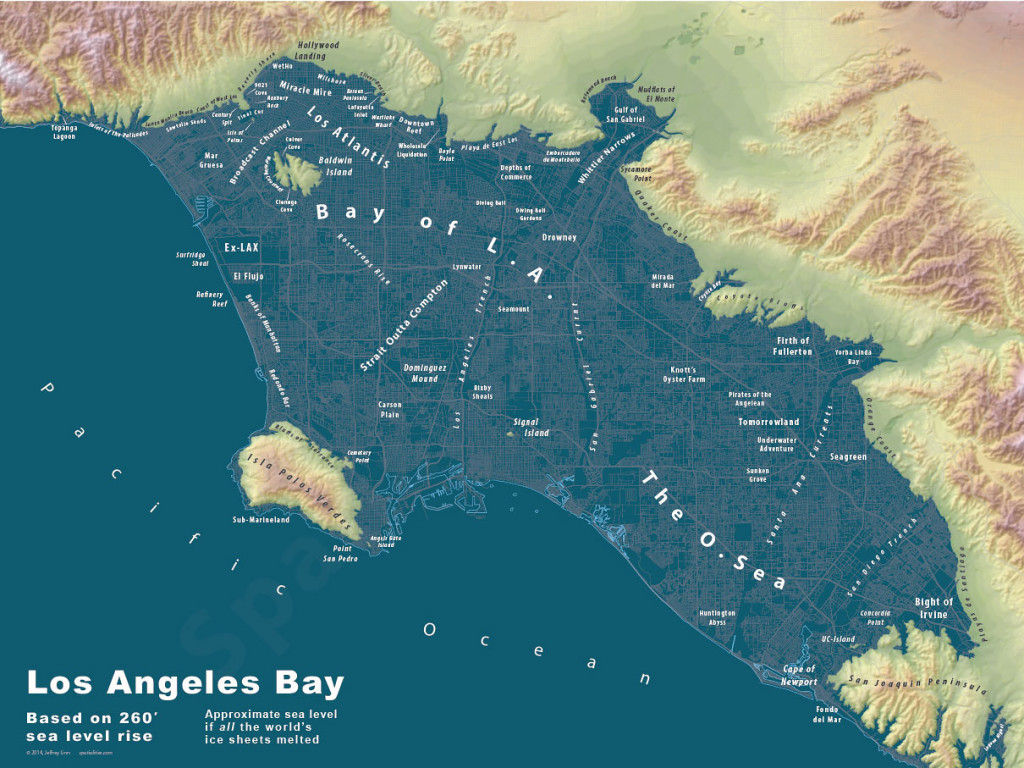 From an interesting article, What the World’s Cities Would Look Like If Every Glacier Melted.

News and Commentary
There are banshees fighting yeti outside my bedroom window, as the winds whip around the corners of the 111 year old apartment building I call home, and the driving rains lash against the windows.
On the one hand, I am glad the banshees are winning, as this would be one serious mountain of snow, should the temperature drop below freezing.
But it is actually 56F on the western tip of Long Island at Midnight – IN FEBRUARY.
This is the second time in less than a month that we had such a storm. The last one came less than a week after a blizzard.
So I am a bit concerned for the planet that, you know, is our only home in the vast emptiness of what could possibly be a lifeless universe.
And even if it isn’t lifeless, it does not do you and me a bit of good. We cannot exactly travel to anywhere else.
We cannot even send one human being to the nearest desert planet bombarded by radiation that would fry Earthborn life in hours, and has no breathable air.
We certainly cannot send them TRILLIONS of miles, across the generations of human-life-years it would take to get anyone to where it, maybe in a very, very, very, very slight chance, might support human life, with technology we have not developed yet because the wealthiest societies on the planet throw away almost all of their Gross National Product on barbaric machinery of War, when it could have been used to reach out for the stars, or at least figure out how to keep Miami, London, Hong Kong, and New York City from becoming the under-the-sea relics they will almost certainly be before this year’s college graduates enter their retirement homes. That is, unless some things seriously change.
But so long as people consider vapid morons like Donald Trump as potential leaders of the Free World, well, we are doomed.
It really is that simple.
So you might as well stock up on your favorite fatty foods and delicious dainties and dig in. Because the unprecedented change in the planet’s climate is real, regardless of what wishful thinkers and blind deniers say.
And no, the fact that what we now take for granted as the global civilization may end up in a heap in no way means some weirdly-Caucasian Jesus is “coming back” from somewhere to save you believers from the pain of death before your natural time runs out. That is not a spot to put all your chips. Centuries of deluded folk have been there and done that, each of them sure that the end is nigh.
This in no way means there is no God or that Jesus isn’t all some folks say he was or is. It just means the tidy package trotted out every generation or so to rail against the changes that just cannot possibly mean anything but the impending end of the world, but don’t, is complete hooey.
Humans will adapt, and keep adapting long after you and I are not even remembered by name by any breathing entity.
But that does not mean humans will make it all that far.
Lizards and other things that suck in their food with their tongues while remaining low to the ground with four limbs dedicated to locomotion have a much better chance than we do.
And that is why I am going to make sure there aren’t any lights on in the apartment that do not need to be on, and that all the water taps aren’t leaking any drops of precious fluid.
And then I will have another drink, since it is my birthday.
And someday, no living thing on this planet will know that simple fleeting fact, let alone know the fact that this oddly truncated list of days once called February by less than a majority of the humans who lived on the itsy bitsy thin crust of a molten planet that happened to be in just the right orbit around its mid-size star to allow the stability necessary for advanced life forms like the paramecium to evolve, not to mention the big sex-obsessed apes with guns we call human beings, just by coincidence housed the 24-hour period of time wherein one of the Beatles was born.
And that it happened on the same day (a considerable number of years later) as the birth of the composer of this address.
And as that cold, unfeeling universe shrugs with a collective, “So what? Big deal,” I bow to those who have read this far and thank you. I know that I was alive when some great stuff happened, and some pretty great people made it happen. And I am happy that you are alive this very moment and may, in some small way, wish me happy birthday. You might as well, what the hell difference will it make in the long run?
Not much, really. But it will help another clump of animated carbohydrates, water, and empty space feel a bit less like, well, a clump of carbohydrates, water, and empty space – all of which are becoming endangered commodities, if you haven’t noticed.