At the same moment the doors opened at the NAMM trade show out in sunny Southern California, we were in frozen Nazareth, Pennsylvania having lunch with Tim Teel, Head of Instrument Design at C.F. Martin, discussing the 2014 Martin guitars. Dessert consisted of a sampling of seven Martin prototypes, recorded in 1080p hi-def video, which was later synched to hi-def audio recorded in stereo with one large diaphragm microphone and one small diaphragm microphone.

Vote Now for Which 2014 Martin Guitars You Want Reviewed First!

A full video of each prototype will appear in the near future, along with the kind of in depth review you have come to expect at One Man’s Guitar. Since the reviews will come out approximately one per week, we are happy to receive suggestions of which order these reviews should appear.

Please send an email to oneman@onemanz.com, with Vote for Reviews in the subject field, and include in order of preference each (or all) of the guitars you are interested in seeing.

Here is the order as they appear in the video:

(Not Appearing in the Video)

We will continue to accept votes even after we start putting up the reviews. The first review should be on line before Friday January, 31. 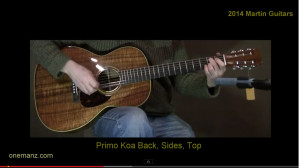