Enduring through the decades, now refreshed with a long-awaited makeover

“…this new short-scale 000 has a full-bodied voice that immediately says it is no “small guitar.” The bass has Grade A beef in its rosewood brisket, a satisfying heft in the midrange fundamentals under a firm flatpick, and trebles that sound precise and strong when picking out melody, or glint like whitecaps atop a flood of sweeping strums that swell and heave with the woody warmth from the Stika/rosewood undertone. And yet, when played with delicacy, notes from the unwound strings roll out from arpeggios as defined, delicate, and pure as sunlit dewdrops…”

The addition of scalloped bracing and Martin’s High Performance neck bring this short-scale 000 into the 21st century, while returning the appearance to a pre-World War II aesthetic. While the 000-28 (2018) gets the full complement of specs now shared by (almost) all of the current Style 28 instruments, the most significant feature is the scalloped bracing. The previous version of this model had the same 5/16” non-scalloped bracing Martin started to put on their guitars in 1946. It is the last of Martin’s classic models that began in the mid-1930s to return to scalloped bracing, which sets free the heart and soul from deep within the Rosewood-Sitka voice.

“What a beautiful strum!” I exclaimed, just after running my thumbnail across the strings the moment I took the guitar from its case.

There is a certain richness to the sound of Indian rosewood topped with Sitka spruce. A steely ring up top and a weighty warmth down below, and mids that have a direct strength, but can get nice and throaty when push comes to shove. And the new Martin 000-28 (2018) is another wonderful use of these classic tonewoods.

While not the full-bore Howitzer the HD-28 (2018) is, this new short-scale 000 has a full-bodied voice that immediately says it is no “small guitar.” The bass has Grade A beef in its rosewood brisket, a satisfying heft in the midrange fundamentals under a firm flatpick, and trebles that sound precise and strong when picking out melody, or glint like whitecaps atop a flood of sweeping strums that swell and heave with the woody warmth from the Stika/rosewood undertone. And yet, when played with delicacy, notes from the unwound strings roll out from arpeggios as defined, delicate, and pure as sunlit dewdrops on the canopy of a lush tropical forest.

The bassiest string has dense solidity that sits down into the undertone, but it is not as outwardly rotund as heard from a Dreadnought or Grand Performance body size. And it is not as wide as the note from the OM-28, which shares the same body size as the 14-fret 000. It is a more defined report, both in terms of the actual fundamental from the string and when combined with the immediate resonance it ignites in the sound chamber.

And the combination of densely defined top notes and the chiseled details heard down in that resonating undertone well makes the strums so colorful and satisfying.

Thus, scalloped bracing has come to the 000-28 at last. And now it also has the comfortable short-scale version of Martin’s modern High Performance Neck, and the aesthetic styling that puts it directly in line with the smaller 00-28, as well as the long-scale OM-28.

Classic is Now the Norm

The D and OM versions of Style 28 (2018) have taken most of their appearance from instruments of the now-defunct Vintage Series, including herringbone top trim and the Diamonds and Squares fretboard position markers that maybe should have returned to the Standard Series 28s long ago, as well as the Aging top toner that looks exactly like some pre-war Martins I have played.

But Martin made no 000 models for the Vintage Series. So, the classic looks of this the new 000-28 (2018) makes me join the ranks of those who needed but one look before exclaiming, “And about time too!”

One thing changed from the Vintage Series guitars is the binding, which is the new Antique White, meant to look like the white binding from the 1940s and ‘50s that has dulled in hue across the decades, adding to a vintage mystique. And there are also the Schaller GrandTune tuning machine that Martin considers to be an upgrade from the Martin brand tuners used in previous years.

The voice of the 000-28 (2018) I reviewed sounded more similar to, but larger than, the 00-28. As expected, the larger sibling has a higher attack ceiling and bit more bassy rumble in its innards, along with nicely defined top notes across all the strings, and trebles that were precise but not at all weak. I feel the 00-28 (2017 and 2018) has a surprisingly full, satisfying voice for its size, especially for guitarists who are not in the habit of playing really hard and stressing a spruce soundboard to the limits of its physical tolerances. But the 000-28 (2018) just has a little more of everything, while providing a noticeably bigger bottom bass note and the capacity for greater dynamic range overall.

Otherwise, the voice was a little more gathered and punchy than the OM-28 (2018), with a little more emphasis on the fundamentals, and a little less presence in terms of the open body resonance heard from the OM. But it is still there. In fact, there is a delightful definition in the depth that drops away beneath or behind the top notes. Those fundamentals line up side by side like the wooden slats of a rope bridge suspended over a cavern, in how they provide buoyant notes of solid strength, while still allowing a continuous perception of the deep, echoing chasm below. It is just not as expansive a depth or with as thick an undertone presence as heard from the OM.

The Long and the Short of It

The 000-28 (2018) and the OM-28 (2018) share the same body size, so at first glance it might seem only their pick guards are different. And now that they have the same string spacing, Modified Low Oval neck shaping, and the High Performance fretboard taper, they are more similar than ever. But the two specs that set them apart matter a great deal, being the size of the top braces, and difference in string scale, which refers to the length of the playable string from the saddle to the nut. 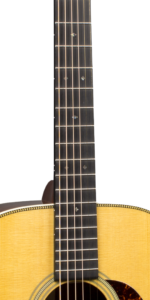 An Orchestra Model has a long-scale neck, of 25.4”, while a traditional 000 has Martin’s short-scale neck of 24.9”. So, the frets are wee bit closer together on a 000, resulting in chord voicings and melody runs requiring less stretching of the fretting fingers, providing a more relaxed feeling overall.

The short scale also means there is less string tension when tuned to the same pitch as an OM, and so there is more play and bendability to the strings, so bends and vibrato are easier to achieve, making short-scale Martins a favorite of lead guitarists, especially when it comes to playing Blues music. For that matter, a determined player can get a full two-fret bend out of light gauge treble strings on a short-scale neck, making such guitars good for covering favorite rock song leads.

But the short scale also means there is a little less pull on the same size soundboard, with a little less potential energy at work, resulting in a little less volume and projection than an OM. And it is the primary reason the relationship between the fundamental notes and body resonance is somewhat different, as well as the difference in bracing.

I find it interesting that the 000-18 was given 1/4″ braces when it received its own vintage makeover a couple of years ago, but the new 000-28 gets 5/16” bracing. I was unable to get a definitive answer from the designers as to why this might be. I guess the simple answer is, they liked how the guitar sounded with this bracing. And so do I. It really does fit right in there between the short-scale 00-28 (2018) and long-scale OM-28 (2018) both in terms of looks and in terms of voice.

And so, in 2018, Martin saw fit to return the 000-28 to herringbone and diamonds mystique of the original 14-fret 000-28 from the mid-1930s, just like the OM-28, 00-28, and HD-28, retiring the black and white ply bindings and large white domino dots that had become downright generic around the guitar world, and are now often associated with dime a dozen lower-end instruments.

But while the new vintage styling may draw the attention of guitarists in crowded guitar shops, it is the tone and playability of the 000-28 (2018) will lead them to fall in love at first strum.

And that’s one man’s word on… 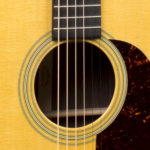