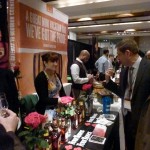 Whisky Live took place Wednesday night, April 3, on Pier Sixty in New York City, one of 16 cities around the globe that host the “World’s Premiere Whisky Tasting Show.” And it was a rousing, educational and entertaining success. Those attending were greeted and treated to countless varieties of malt whisky by more than sixty exhibitors, representing ten nations. There were also several incarnations of America bourbon, Canadian ryes, along with brandies, rum, gin, beer, and even cigars.

Many of the foremost experts in the craft of distilling were on hand to share their wisdom and humor, along with priceless insights, and some of the finest drams available anywhere, many of which cost hundreds of dollars per bottle at a liquor shop, if one can find them at all.

One man who's got something to say about that.

View all of one man's posts.