With the Definitive Character of the Isle of Skye’s Lone Distillery, Talisker 25 is a Mature Expression for Mature Palates

The bottle of 25 year old Talisker I am reviewing holds great sentimental value for me. It had survived Hurricane Sandy, without its packaging and with a torn up label. But luckily it remained sealed.

I received it as a gift because I was storing some valuables while a friend’s home was renovated, so they were not destroyed with the rest of his belongings, during the devastation that ravaged the east coast of the United States, one year ago today.

And like the ever changing weather of the northern seas at its home shores, this whisky is in constant flux upon the surface, with a deep serenity beneath.

Overall, it is a well-integrated dram; with its own unique take on the Talisker mix of sweet, pepper, peat smoke and herbal bitters.

Color: I thought it interesting that the bottle was dark green. The whisky is slightly darker than other core Talisker expressions, which come in clear bottles. In the glass, the white wine gold has a blush of amber, and a brassier edge to it, and almost a copper green in the darker corners.

Nose: Talisker, only more so. Like seeing sunlit, golden locks turn to reveal the face of a prize fighter, there is that brief promise of raw honey sweetness, which is shoved aside by the chemical smell of maritime peat. And the merry-go-round is under way. The third intake brings that odd sweet smell of highlighter pen, which morphs into a delicious apple strudel, that somehow changes to banana pudding, a milk chocolate candy bar, then waterlogged wood, or is that the outside of a pineapple? A whiff of scrambled eggs gives way to steaming road tar, then tarry rope, dried out tobacco, sandalwood and ginger, Bird’s egg-free custard rises warm and comforting, and the lead horse has come round the bend, followed by the rest of the parade.

But it is a carousel sitting on an old, wooden dock, at low tide, the living kelp glistening after each lapping wave rolls out to sea.

Splash: Following such a big and busy nose, the splash is surprisingly mild. A sweet and fruity edge that is then swamped by honey, lemon, and prickling pepper, before the exact fruit can be determined. I will commit to dried apricot rather than fresh apple. And then more pepper follows, and sinks into all sides of the mouth, tongue and snoot. But it is not particularly spicy. It is a white pepper, not black. And what alcohol burn appears is even more surprisingly mild, given the high octane involved.

Palate: Citrus rind is washed down with cambric tea, the condensed milk cut with water so it is slightly creamy and nowhere near thick or syrupy. But that sweet, custardy vanilla fades quickly to a pale backdrop for the gingery spices, the lemon-lime citrus, and the constant hum of pepper. It seems relatively simple: sweet, sour, bitter, salty, and heat. But it is the constant interplay between those basic elements of wood, malt, fruit, and planty peat that make it so interesting.

Tea tannins begin to take hold, from such a long stay in the cask, and true butterscotch begins to override everything in the bouquet except the seaweed, as the buds of tiny wildflowers open among raw cinnamon sticks.

The immediate finish is quite sweet and honeyed, with tingly ginger, orange marmalade and a slight coating of olive oil. Over time the sweet fades and the oak and spices remain.

Water: A splash of water and the sweet is in retreat.

Water spreads out the full body, making it creamier, but it also intensifies the pepper, and the steady seaweed and earthy peat release the actual smoke phenols. Talisker is always more peaty than smoky, but as the eldest Talisker I have tasted, this is also the least smoky. Water wakes up the smoke, but it remains very much a background player in the pageant.

Musty milk chocolate comes out in the later nose, along with spruce cones and birch bark that combine into a mellow wintergreen, with a cameo of cloves.

But this is not as mellow as the 18 year old Talisker. It is more intense in its dryness and its spiciness, as the old oak is taking command. The sugars are cooked down, the fruit is fainter and stewed into marmalade. This is not a tropical dessert. This is the outside of a coconut, the rough surface of a pineapple, the scent of bananas still in the bunch. And the darker aspects of the peat and oak provide the unsweetened pie crust for the lighter, fruitier facets.

In direct comparison to the 18 year old, the 25 is not as sweet, nor as flowery, nor as tropical. I will attribute this to the modern trend of using refill barrels for older single malt.

Having at least some first-fill bourbon barrels would account for the thicker vanilla sweetness and tropical fruit steaming off the surface of the 10 year old and 18 year old. Leaving first-fill bourbon barrels out of the equation in whisky aged so much longer insures that the charred oak and bourbon will not exert too great an influence on the Talisker that came out of the still. It is quite woody, but without so much external flavoring. So, this is a purer Talisker, if you like. And one with strong definition. 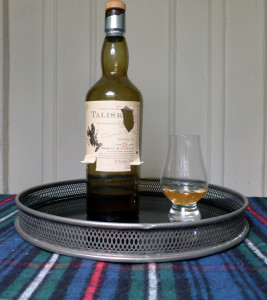 At 25 years of age, Talisker seems to have crossed its own Rubicon, and the late stage tannins add a woody bitter edge not tasted in the younger expressions. The smoke phenols are starting to break down as well, so the plant-like taste of the peat stands out all the more.

This has matured into a fully adult whisky, with great focus to the flavorful highlights across the entire palate. Deeper down, the many facets marry into a unified core beneath the glinting crests of its dynamic surface.

As the finest spirits are thought of as very precious, as they dwindle in the bottle, it is a finer thing to pour some out on occasions such as these, and raise them in remembrance of that which is gone, and in appreciation for what we are so lucky to have.

Learn more about the Talisker Distillery

Other Talisker reviewed at One Man’s Malt 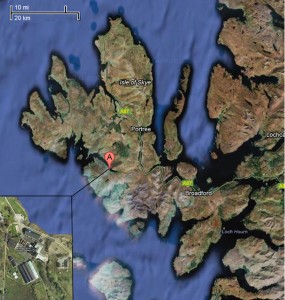