Malt for the Common Man Hall of Fame member, Talisker 10

Talisker comes from the Isle of Skye off the western coast of Scotland. The barley used to create it was malted over peat smoke to phenol levels typically around 20 parts per million. This makes it ten times smokier than most single malt scotch, while being less than half as smoky as some of the hardcore smoke monsters from Islay.

The water is sourced from a spring on Cnoc nan Speireag (Hill of the Hawk) and contains notable quantities of raw peat particles. A potion of bright gold that suggests pleasantly sweet nectar sets up the first of many surprises, beginning with the first sniff.

Nose: A pungent tweak of the nose with the feinty bite of polished leather and bitter seaweed focuses into brine awash with greenish peat and astringent citrus rind, smoke wafting behind it. Peppery wood spice of American oak leaps, and from the bourbon that once filled the cask, sweet vanilla and that vaguely “pina colada” mix of coconut, banana, and perhaps some pineapple glowing from glass. Faint sea spray washes in with the next wave, as malty sweets glint out from the smoky cracks. More and more smoke emerges like the cooling char of a beach bond fire.

Splash: A facade of sweet malt leads the way, followed by a squirt of cut lemon, and then the Big Bang of serious peat. A rush of peppery alcohol esters plows through, followed by a flowing, glowing rise of malt and salt, like vanilla saltwater taffy, cut short by a dash of prickly medicinal wood bark.

This whisky has a lot of Wow Factor from the get go.

Pallet: Thin slivers of coconut run across the center of the tongue. Malt sweets tumbling with wood and peat, leave a trail of black pepper and unsweetened cinnamon.

Good, solid body, mild oil. It moves from medium to full bodied by the time one glass is past.

The botanicals are dark green, maybe spruce needles? The sweet malt comes through on each taste, but it is narrow compared to the peat, and the peppery spice that grows as the malt fades, and the oak remains steady.

As the mouth adjusts to the alcohol and peat smoke subtleties appear, like banana pith, honeysuckle, and sea salt. Pepper infused Cambric tea washes over the tongue, the condensed milk well watered down. Golden treacle has replaced the malt with a mildly bitter herbal essence from the peat starting too out-weigh the pepper.

Any halt to the sipping at all and a medicinal tang rises up and then fades into oaky, smoky wonderment.

Faint young tannins from the oak begin to dry the outside gums. The oil never builds like other coastal malts, but stays steady, like a sea foam.

Saline surfaces in the finish, smoke is steady but not overpowering. It is more the damp remnants of a campfire rather than one still burning.

The body remains nicely buoyant with a splash of water, but not as full. The tropical fruit, along with herbs and honey spread out, but the pepper and spice actually increase in intensity.

As the pallet fades into the finish the smoke remains, but the earthy peat stays a long while as well, and a continual return of young oak, like bits of the dust after sawing through a plank.

Dry Nose: Big smoke in the empty glass with still more pepper on a bed of thistle and spruce needles.

A classic and on the shortest list of the best whisky in its pricing tier.

And that is one man’s word on …

Learn more about the Talisker Distillery

Other Talisker reviewed at One Man’s Malt 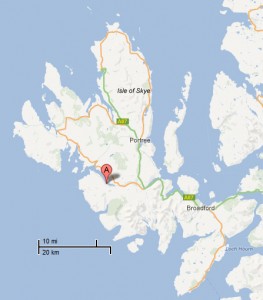