After decades as a professional spirits critic, chronicler, and advocate most highly respected around the world, one might expect Dave Broom to have his whiskies straight.

But I may now confirm the rumors that he has been mixing them up, and doing so on purpose!

In fact, the mixing of whisky with all sorts of other ingredients is a primary theme of Dave Boom’s new book, Whisky: A User’s Guide, which will be appearing on American shelves in April 2014, published by Mitchell Beazley.

I rode the elevator with Dave Broom on our way to the special tasting he hosted today, at the New York offices of his new book’s U.S. distributor, Hachette Book Group. This allowed me to have some exclusive insider questions answered, before he met with various marketing professionals to share some of the practical applications explored within the manuscript they will soon be promoting, and which should prove a superb companion to his most excellent tome, The World Atlas of Whisky. I was glad to hear that this handsome coffee table book is still selling well, as it gets my highest endorsement as a great gift item for your dearest whisky fan. 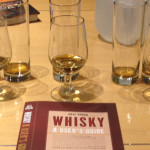 One man who's got something to say about that.

View all of one man's posts.