A Peabody Award winning radio journalist, Trey Kay has many years of experience interviewing people of all walks of life for various programs on NPR and New York Public Radio. For his own podcasts produced for West Virginia Public Radio, he has bent a keen ear to the opinions and experiences of those whose core beliefs have been affected by encounters with other people different from themselves.

In some cases they began in a hostile stance against members of their own community, because of contrary points of view regarding issues such as gay marriage and progressive trends in public school curriculums and textbooks. But these same individuals came to be more tolerant and even friendly with others they first encountered as dogmatic enemies, once they came to know them as people.

As a nation, we hear the calls to find a resolution to the political gridlock in Washington D.C. and the pleas to heal the wounds of cultural division based on race, sexual orientation, economics, and gender. But the “us vs. them” mentality prevailing throughout our society negates efforts towards a solution, as the opposition on any issue is demonized or portrayed as wholly alien and bent on destroying all that good people hold dear.

But unlike typical journalism that focuses on the disunity implied by the us vs. them in current events, Us & Them puts the emphasis on the fact our ideological opponents are also Americans. We may not always agree, but we are here together, part of the same nation, people, society, with “them” often having much more in common with us in everyday ways than the firebrands care to remember, as they urge their listeners to stand firm and not be moved from the dogmatic positions they espouse.

It is a refreshing change from what normally passes as radio journalism these days.

In “Trey and Alice,” the inaugural Us & Them podcast, Kay shares conversations with Alice Moore, the woman he first interviewed formally in 2008, for a documentary on the societal clash that erupted in 1970s West Virginia over the textbooks in public schools. That was when the Moral Majority first came to national notice, and down home Americans started building bombs to terrorize the opposition.

Initially, he confesses, Trey Kay regarded Mrs. Moore as “crazy” when he first saw her on an earlier television program about the rise of the religious right in America. And after some effort he tracked her down to learn more about her claims that the textbooks accompanying the new multicultural curriculum at that time were anti-American and anti-Christian. In return, Moore first perceived the journalist as yet another member of the liberal press bent on distorting the truth as she saw it.

Since then, Moore and Kay’s opinion of one another changed, as they grew to respect the other as a person who shared the same home-state culture and background, and who were sincere in their beliefs and values. They remain on friendly terms today, even if they do not always come up eye to eye on various social issues.

Available for download along with the US & Them podcasts is the original documentary The Great Textbook War that earned Kay a Peabody Award and resulted in his meeting Alice Moore. For a program covering events from half a century ago, the opinions and voices heard therein could have been recorded in Texas last month, and several other places around the country.

Throughout the podcasts Kay allows people from all sides to speak their mind and explain their point of view and what they believe. And he does so without automatically following such statements by a counter-statement. In other words, he does not set up people like Mrs. Moore just so someone from the other camp can refute their claims. He allows the listener to choose who to agree with or find most credible.

The second podcast in the series, “Revisiting the Grand Palace,” focuses on changing attitudes regarding Gay and Lesbian citizens and their interpersonal relationships. And the most recent podcast is “To Give or Not to Give,” which uses the attitudes toward panhandling to explore the power of stereotyping and “otherness” where individuals separate themselves conceptually from someone else by lumping a person into a collective “them” that can be rejected, looked down on, or otherwise prejudiced against by, for instance, declaring all panhandlers as drug addicts and alcoholics, or simply lazy.

But in all of these podcasts are people whose black and white perception was colored by their close encounters with real flesh and blood human beings. Some of the voices heard offered different and enlightening perspectives about various issues, some gave the lie to various assumptions, or were themselves moved to change their attitudes toward others because they came to realize their prejudice was unfounded, or at least the humanity of those they encountered softened original perceptions.

While people often maintain their original position relating to such issues, they may be moved toward greater tolerance of unfamiliar points of view expressed by people different from themselves, once nameless, faceless statistics are realized as fellow citizens with hearts, feelings, and similar desires for the liberty to pursue personal happiness in their own lives.

Trey Kay’s pleasant manner and affable speaking voice has a calming effect, but his concern for his topic comes through clearly, as does his enthusiastic curiosity about the lives and outlook of other people, so that his monologs and interviews never acquire that typical NPR sedated talking head tone. And never does he seem to query someone and then move on to the next talking point while his recorder takes in their response.

He listens and reacts, remaining very much in the moment, which is engaging for his audience, and those he is questioning. And his sincerity is bolstered by the fact his own personal points of view have been broadened over the years by listening to those who he may not agree with, and gaining some insight into why they see things the way they do.

Getting to know someone may not convince a person to give up their position on an issue or belief, but it goes a long way to diffusing the deeply ingrained us vs. them perception that implies someone who disagrees with our point of view couldn’t possibly have anything of value to offer us in other social ways.

Richer for the Experience

These podcasts brought to mind a couple of unrelated experiences of my own. The first was witnessing an interview with Donald Ritchie, the official historian of the United States Senate, who retired in 2015.

When asked how things had changed in Washington compared to previous eras, regarding the current toxic atmosphere between the two ruling parties, Ritchie made it all seem quite simple. Basically he said, today’s Senators do not know each other as people.

He said, in the era of Senator Lyndon Johnson and President Eisenhower, or President Johnson and Senator Barry Goldwater, or President Regan and Senator Tip O’Neil, the members of United States Congress lived in the same neighborhoods, their children played together and went to the same schools, their wives worked for the same charities and they all played golf and bridge as the same country clubs, and danced with one another at social gatherings, and they learned to understand each other as fellow Americans who could work together to find compromises that got things done.

Today, he went on, their families stay behind in their home states, and they fly home – on the tax payer’s tab – the moment their three-day workweek ends. They do not get to know each other as people in any intimate way, like they did during the previous 200 years.

On a more grassroots level, my own experience in making friends from the other side of the aisle concerns an on-line community called the Unofficial Martin Guitar Forum.

One of the oldest companies in America, Martin makes professional-level acoustic guitars that saturate music popular in all corners of of American society from gospel and bluegrass to acid rock and hipster pop. As such, Martin players come from all sorts of backgrounds and viewpoints when it comes to the broader fabric of American life.

Some of my favorite friends were met at Martinfest, the annual UMGF gathering in Nazareth, PA, where the guitars are made, and at a hotel in neighboring Bethlehem, where all-night parties insure many of the participants come to know one another in ways only all-night parties filled with music can allow.

Among these friends are people on complete opposite ends of the political spectrum from my own position, when it comes to the sorts of issues explored by Trey Kay in his Us & Them podcasts. Prior to meeting them in person I would have never imagined some would become the kind of people whose friendship I would reap, or whose funeral I went out of my way to attend.

On all sorts of internet forums, tensions and rancor can spring up when it comes to controversial subjects. And the UMGF is no different. So, politics and religion are banned from discussion. Still, there are typical black and white pronouncements about guitars or guitarists and opposing viewpoints that can get just as heated as political debates.

Hostile and even vindictive attitudes can arise, but sometimes it only takes a single meeting of such adversaries in person, helped by social lubricants like music, for them to start relating as people, not just heated opinions on the internet.

Not everyone who gets to know others from different walks of life alters their intolerance for those of opposing political opinion and core beliefs. And it is noticeable how some people on the progressive side of the spectrum are capable of just as much intolerance and hostility toward those of a conservative position, as anyone alighting the branches on the far right.

But where many folks who never attend Martinfest remain as intrenched and curmudgeonly as ever, those of us who do meet face to face go a long way toward loosening up, once we learn there can indeed be common ground, regardless of our differences. For many of humans, it becomes impossible to reduce another of ours species to the level of “enemy” once we learn more about them as people, with similar hobbies and tastes, and with hearts and minds, full of affection and care for their own family and loved ones.

More of us could benefit from such interaction, or at least stopping to listen to what their fellow Americans have to say, what they feel about things that matter to them, and why. And these podcasts are one window into the viewpoints and opinions of all sorts of Americans.

It can be difficult to be non-judgmental of others, especially when it comes to hot button issues. But Trey Kay manages to remain open and encouraging to everyone he features on the Us & Them podcasts. He is eager and interested in hearing what they have to say, and that helps the listener increase their own interest.

Not all who listens to what Kay and his subjects have to say will change their opinion on various issues discussed, and they may not change their view of the people speaking their mind into the microphone. But I suspect a great many just might be surprised by how they really feel about such things, once they download one or all of these podcasts and give them a listen.

And that is one man’s word on Trey Kay’s Us & Them. 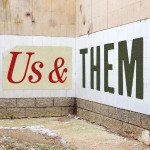 A newspaper column by Trey Kay about Us & Them and the cultural divide in America can be read HERE.