That would have been the perfect headline for the New York Post, or some similar tabloid, if only goalie Tim Howard had managed one more save as he heroically withstood the siege, before the absolutely brilliant goal by Opie Taylor, err, Kevin De Bruyne, broke a scoreless tie in the 93rd minute and America’s loss to Belgium in the World Cup.

Most Americans likely recognize the “In your face, Flanders!” as something Homer Simpson spouted when celebrating some temporary advantage over his next door neighbor. Many will not recognize the double entendre, since the average American’s knowledge of geography and history is so poor they do not know Flanders is in Belgium.

Or that Brussels is the capital of Flanders, as well as the national capital.

Or that August 4 will mark the 100th anniversary since the German Empire invaded Flanders, their next door neighbor, on the way to attacking France. Or the fact that this region slightly smaller than Connecticut was the site of the first shots fired on the Western Front, as well as some of the last, with the most obscene warfare ever known taking place in between.

Banners seen at the beginning of FIFA World Cup matches say “Handshake for Peace.” That might appear as a sanctimonious gesture, as if the handshakes of these privileged, cocky young men could help the cause of world peace as they appear on television, having trained for months with the full advantages afforded by their governments, to reach peak physical condition, and then bask under the laurels of their well-rewarded victories. But it is a good thing to remember how governments usually spend their money to train up their young men before sending them off to face those from other nations.

According to the Telegraph, the average age of the Belgium squad is 25.2, a couple of years older than the age of the typical infantry private who died in combat in Belgium during the Great War, which was so horrific it was expected to end all wars.

Unfortunately, it took another 22 years and another fast break by the Germans through the Belgian defenses, on their way to scoring a major victory against France at the start of another war, to show us just how barbaric we humans are capable of being to our own species and why that is a lesson we should never need repeated.

Fortunately, the end result of the Second World War changed the face of nationalism (at least in Europe) to the point that, when we see the young Frenchmen and Germans facing each other Friday afternoon, we can no longer imagine them bashing each other’s brains out with rifle butts, or battle axes, or sticks and stones, as they have through almost every generation since before Caesar was a boy.

Civilization has always depended upon humans learning to channel their most primitive impulses into more acceptable and hopefully peaceful and productive avenues of expression and release. Competitive athletics can help achieve that in some very real ways.

Someone recently came up with a meme showing some American sports fan roaring with enthusiasm, matched to a caption along the lines of “Imagine if all that energy were put toward something useful.”

Upon seeing it, immediately I thought of how certain members of Congress have said almost the exact same thing, as they voted to cut all funding for the Arts, and even music education in grammar schools.

Athletics have always been as legitimate a part of human cultural identity as art or music, and every bit as enriching. Those who could run the farthest or the fastest, or jump the highest were considered as admirable and sexy in ancient times as they are today, just like those who can dance a great Tango.

A well-executed play on the gridiron or basketball court is quite similar to choreography when it comes to physical skill. Olympic gymnasts and Wimbledon champions are ballerinas, the ace pitcher no less an artist in the way he applies his dexterity to manipulate a baseball, as the painter manipulating a brush and oils. 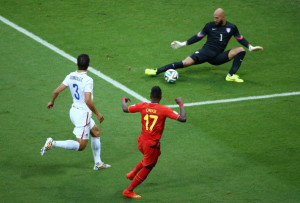 And one of the most enthralling aspects of athletic competition as a form of entertainment lies in the fact there is no script. Each and every minute is an improvised scene, the drama and comedy, tragedy and exultation played out in the living moment, just once, for those fortunate enough to bear witness.

Many of us marvel at athletes when their feats of skill and daring do are beyond and above anything we could ever hope to do ourselves. And if their particular sport is something we take part in, or perhaps did in our youth, we appreciate it all the more, because we have a personal understanding of the degree of difficulty required to succeed in the Big Leagues. And we often dismiss sports we do not know well, as if their arcane ways and means can’t possibly matter as much as our sports.

But I have to say, as an American who developed an interest in soccer later in life, the footballers performing on the Brazilian stage this summer are the greatest athletes in the world.

The clock never stops for them, and they are actively engaged for almost every second of their 90 minute match, or 120 minutes if extra time is required. They are running, juking, slicing and dicing with the intensity of basketball players, on a playing surface many times greater, outdoors in all kinds of weather. Only this year did the World Cup institute brief hydration breaks because of the intense heat and humidity in Brazil, and only for certain matches.

But where basketball scores often reach into triple digits, it is so difficult to get a soccer ball into the net it is not unusual for the best teams to draw 0-0. And those are often the most exciting matches of all, as move for move, the greatest of athletes work out strategy like chess players, probing for weakness, and countered by physical magicians every bit as talented as them. And the players’ ability to stretch their hamstrings over their heads, while flipping backwards and still aim a shot on goal is as breathtaking as their ability to survive such full-speed, unpadded, bone on bone collisions and remain in the game. As once you go off, you stay off. 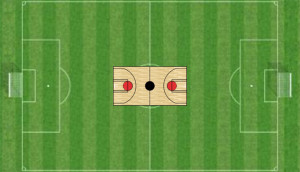 This summer we are watching what are essentially all-star teams, competing at the highest level, honed to a level of physical fitness that allows almost everyone to run like Olympic sprinters during the waning moments of their drawn-out matches. It is a stupefying level of stamina, and exertion that would drop most mortals in their tracks.

The largest and strongest boys, and the fittest and fleetest of foot would have certainly been the best hunters. But in times of foreign agression, they would also have been the front line troops, leaving their mothers and children and prospective widows behind. And those batters who say they can see the direction of the laces 90 feet away, when the baseball is still in the pitchers hand, would have been archers, or placed in a tall tower as a lookout.

The only people called champions were those capable of standing alone to repeatedly defeat opponents in combat that routinely sank to levels of savagery unknowable to all but the most unfortunate among modern populations. The lucky who survived late boyhood into early manhood would have been the grizzled old veterans marching in yet another parade, but expecting to go over the top for king and country whenever the next time comes around.

The ancient Olympic Games were for men only, competing against their brethren, but each trained for the purpose of tossing the javelin, discus, and shot far into the ranks of an oncoming enemy. That original purpose remained in the modern biathlon, an Alpine sport where someone makes their way on skis to then fire a rifle at various targets. And many other sports, human and equestrian, originated in military necessity as well.

It is said that football, in all its variations, is a ritualized recreation of the hunt of the pack, with the one in possession of the ball as the prey. But we do not need the jargon of American football, with all those bombs and blitzes, to realize that the most compelling facets of competitive team sports are rooted in human vs. human conflict.

But there are important differences.

Modern day gladiators enter the arena knowing they and their opponents will be leaving it again on their own two feet, unless something goes terribly wrong. And they can represent a squad, or a city, or a state, or their country, proudly and exulted, perhaps even more so because they play by the rules and everybody goes home to their families – win or lose.

This year, the young Bavarians and Alsatians and Santafesinos and Flemmings left their far-flung jobs and families to answer the call of their fatherland or motherland, and don the uniform of their homeland. When they march out in formation to give the last ounce of effort and devotion in taking on the best some other nation has to offer, they allow the many millions rooting them on to bond and enjoy the ancient sense of tribal unity and national pride. But when they fall in their efforts, in the arenas of Brazil, they are often helped to their feet by their opponents, and if they suffer some wound as a result, they usually receive an apology, before both continue on for the honor and glory of their respective flags.

And so, Tim Howard fell and lay defeated upon the field. And yes, even if De Bruyne and his squad live to compete another day in this year’s World Cup, so Howard will live to sacrifice his body on the very last line of defense on many such days. And people will sing his praises, as they do today for those amazing 16 saves. 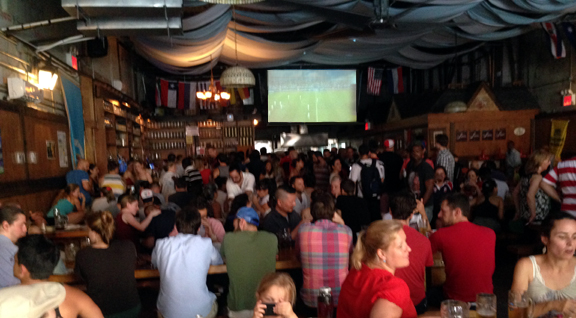 Beer Garden, Brooklyn, NY –  More Americans embraced this World Cup than any other

Nearly 100 years ago, the United States gave up its policy of isolationism when it entered the World War. In recent decades more and more Americans give up their own isolationist tendencies as they embrace the world’s game and marvel at the world’s greatest athletes in the World Cup.

As Americans we rejoice in our national identity, while being reminded that we are but one nation in a world worth getting to know better, and that we can take pride in our efforts even if we are not the best, greatest or #1 at everything. Just getting to the final 16 was a tremendous achievement.

As humans the world has come a long way since the fields of Flanders were soaked in human blood. But a glance at today’s headlines shows that many of us still have a long way to go. And yet, just as yesterday’s match showed that people can bond together in natural pride and identity, win or lose, I hope Friday’s matches reminds many that anyone could, and someday hopefully, everyone will be able to stand for the national anthem of their most ancient, historical foe and share a handshake for peace.

Tim Howard’s amazing saves and why the World Cup matters

Here is a short video with highlights including a Tim Howard save, the USA’s lone goal, and the frantic final attempts to score another.