Malt for the Common Man Hall of Fame Member, Highland Park 12 is on Our Short List of Must Have Scotch

Overall – As balanced and complex a 12 year old single malt as you will find. Better than many brands’ older scotch, it does not have the expansive depth of the 18 year old, but all the fruit, spice and heathery peat is there for half the price.

Splash – More sherry, a rush of heat followed by dried fruit and butter rum. Quite smooth for 12 years old.

Palate – Medium bodied, rounded, with a marvelous balance of restrained sherried fruit, lime essence and
woody spice, over a backdrop of malt and heather, with a bit of pepper and peat.

“It is such an ensemble cast that the entire production becomes the star.”

In my salad days of the 1990s, whenever someone asked me for malt whisky gift ideas, I would say Highland Park was the best bet. It was like a combination of most every style of single malt out there, with the sherried fruit of Speyside, the spice and sweets of the highlands, the salt and peat of the isles, and even a trace of the citrusy florals of the Lowlands, all nicely balanced in one bottle.

I often declared the 12 year old expression one of the few entry level single malts on par with the older, pricier offerings from other sources. But I must confess it has been some years since I returned to the basic 12 year old. So, I am eager to find out if it and/or I have much changed in our tastes.

The Color – Along a white wall, it appears dark brown, with glints of red and gold. But in the light, it turns pale and translucent, with orangeish hues and highlights of burnished amber.

The Nose – Immediate sherry and with it comes a whiff of sulfur typical of scotch aged for a good number of years in Spanish oak that previously held sherry. It therefore suggests some spirit older than the guaranteed 12 years on the label. There is some honey sweetness and some muted fruit, almost a brandy quality in the way it seems like a reduction of something that was once fruit. And washing up is noticeable lime essence balanced by cherries and some wood spice, and eventually a dusting of greenish peat.

A deep inhale picks up a faint smokiness and some brine. But for an island whisky, or even a coastal one, it is miniscule and steeped in honey. But smoke it is, as if the glass was left near a dying fire.

The Splash – dry sherry up front followed by a hot rush of peppery alcohol, quickly followed by subdued malty sweets, as the sherry and some fruit esters roll out from the middle of the tongue and move off to the edges before they can be identified, revealing butter rum.

The Palate – an entity so well-married it makes it is difficult to separate its many flavors. It is not sweet, yet it is not bitter. The dry nip of sherry is not as astringent or pronounced as that found in Glenfarclas or Macallan. The spice and oak balance what fruit and cereal attempt to break out. There is citrus present, but it is not center stage as in other whiskies, which can seem like orange-flavored drinks. Not a drop of bourbon to be found, unless my taste buds deceive. Since American oak and European oak refuse to come forward, it suggests a combination of both were used. But it also suggests that refill sherry casks make up the majority of the vatting of different casks that went into the bottle. On the whole it is firm, with medium body and a well-integrated dram.

The Immediate Finish – A rest brings some oak developing at the top of the mouth, but only the slightest presence of young tannins and their telltale dryness show across the inside of the lips. Very slight candle wax forms as well.

Drinkers unaccustomed to truly peaty whisky may say this is smoky. I find it not so. Some organic phenols are there, but completely in line with the rest of the flavors, if not behind them. More noticeable smoke coats the inside of the empty glass than inside of the mouth.

A New Pour – A return to the nose debuts light, creamy caramel, like a desert that had some brandy in it. Still some lime, or is it bay leaf? And as if to keep that from getting too far out front, some florals blossom as heather, or is it faint honeysuckle?

A red Anjou pear is included with the new splash across the tongue, there is some orange essence woven with subtle spices of sandalwood, and is that cinnamon? Nope, that is raw ginger!

Wisps of sea air develop in the later nose and intensify in the nasal passages after sipping. Some salt and smoke start to emerge, along with more wood.

But there is no sense of pronounced fruit, or sweetness. Just dry sherry with somber fruits, any sugars remain well behaved. There are no perfumey rose bushes, as found in some highland sherry monsters. Just breaths of rose oil and honey. Whatever the main sweetness, it peeks out from the bouquet, but is undetected on the tongue.

No fireworks of spice or peat go off, just their delegates raising a hand along with the rest of the assembly. What oak is there is civil and makes a nice frame for the balanced union of all those many things. It is such an ensemble cast that the entire production becomes the star.

This is different than I remember, not as fruity-sweet or lush, with more citrus and greater dryness, and woodier qualities to the main profile. Perhaps my taste buds have aged, but this seems a more grown-up dram than the Highland Park 12 of my youth.

With Water – Only with water do chocolates appear in the nose. Sugars come out in the mouth, along with noticeable orange. But all along, any note that takes shape is countered or balanced with a foil. It is like some sort of squelching buffer is engaged. Malt or honey is met and subdued by wood. Sherry fruit acids are neutralized with spice and malt. What vanillin rises from the suspected American oak is homogenized with cocoa and citrus oil. The usual figs and Spanish prunes in European oak have been stewed into an unsweetened tonic. And behind it all, filling in the gaps is subtle peat, the chlorophyll and heather keeping any charcoal phenols in check.

The Finish – Pleasant, and long, but mellow and rounded. As things fade, smoke remains steadfast, with some oak and malt.

The scent from the empty glass allows the smoke some spotlight, with dusty, old chocolate and musty, mossy peat to keep it company. The later dry nose has maple, chocolate, faint sour cherry candy, and all of it in a cloud of smoked ginger, which was likely there all along but so plump with the other flavors it went unperceived. But now that it has been recognized, its influence on the entire proceedings is detected in all further tastings.

The Conclusion – While different than its illustrious predecessors, this Highland Park 12 year old lives on the top shelf of its pricing tier. Its place remains secure in the Scotch for the Common Man Hall of Fame.

Other Highland Park reviewed at One Man’s Malt 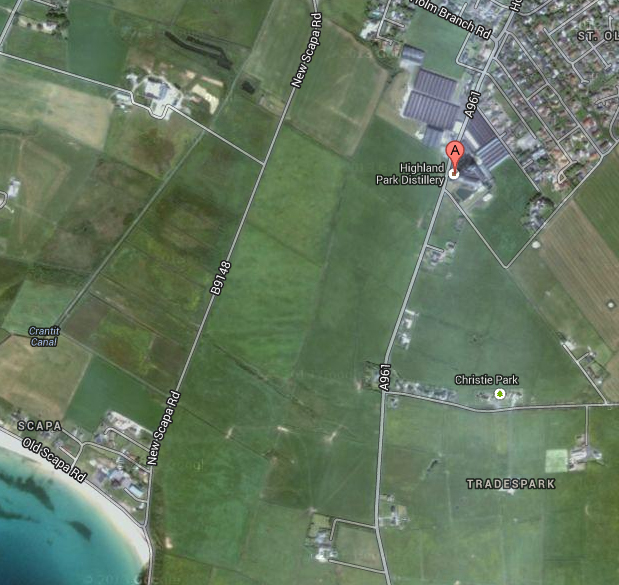