To see how today’s owners were doing with the revived BenRiach distillery, we chose the 16 year old expression, basically their core spirit with some maturity and simply aged in American bourbon oak, from the look of it. The answer is they are doing marvelously well.

The contents of the 16 are coming entirely from spirit made at the distillery before Billy Walker took the reins from its previous owners. According to BenRiach’s manager, Stewart Buchanan, Walker went through the entire stock of aging casks and personally developed the modern vattings that make up the current product line.

Color: The light and burnt golds reveal some amber in the darker corners and seem to predict what is to come.

Nose: Full and indulgent, with some honeyed sweetness offset by enjoyable feinty notes of fresh cigars in the box, and stable yards full of hay, fallen leaves, and creaking saddle leather. Peat is apparent early on. But shyly, each time the iodine and musty smoke stands up, some more flamboyant facet steals focus.

The center is malty and toffee-like, but it is infused with a hoard of mixed fruit, led by autumn cooking apples, a few pears, and fragrant oranges resting in an old wooden bowl. And winding throughout are subtle chocolate notes that increase over time.

This is a rich and savory whisky, ideal for a blustery Halloween night.

Splash: A splash as big as the nose, but with a surprising pop of black pepper, some prickly wine oak, a rolling blanket of malt, mulched leaves and musty peat.

Palate: Nicely full but quite firm. Chewy but lean, with sweeter edges around a dense and savory center. The wood is always there but never dominates.

This is a rather grown-up whisky, which belies what honey appeared in the nose. The grain is reminiscent of cooking oatmeal, the toffee is of burnt brown sugar, the chocolate is dark and bitter, the herbals are fit for a roast more than a dessert, the fruit is tart, like dry white wine, and although there is a spritz of lemon juice, the oranges are the peels rather than the flesh, and baked into a whole grain loaf with an occasional black currant.

Water brings out a bit more of the fresher fruits, mainly tropicals such as banana and coconut from the American oak, and puts some juice in the baked currants. But it also releases the wood smoke from the peat, and the feinty aspects like candle wax, some burning sulfur and a vaguely fatty quality one taster described as fresh lobster meat; hold the butter.

Finish: The initial finish is drying and clean, with as complex a mixture of toffee, pepper, chocolate, orange, and woody smoke as found in the palate. As it fades the smoke becomes more noticeable, along with some raw, yeasty dough, and the rest reduces into the faint but clear scent of maple syrup.

Dry Nose: Maypo, that maple flavored porridge, but I can still smell the burnt kitchen match that lit the stove.

Learn more about the BenRiach Distillery 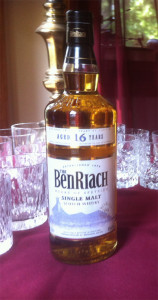 The Whisky Lady take on BenRiach 16