After decades as a professional spirits critic, chronicler, and advocate most highly respected around the world, one might expect Dave Broom to have his whiskies straight.

But I may now confirm the rumors that he has been mixing them up, and doing so on purpose!

In fact, the mixing of whisky with all sorts of other ingredients is a primary theme of Dave Broom’s new book, Whisky: A User’s Guide, which will be appearing on American shelves in April 2014, published by Mitchell Beazley.

I rode the elevator with Dave Broom on our way to the special tasting he hosted today, at the New York offices of his new book’s U.S. distributor, Hachette Book Group. This allowed me to have some exclusive insider questions answered, before he met with various marketing professionals to share some of the practical applications explored within the manuscript they will soon be promoting, and which should prove a superb companion to his most excellent tome, The World Atlas of Whisky. I was glad to hear that this handsome coffee table book is still selling well, as it gets my highest endorsement as a great gift item for your dearest whisky fan.

This new book will be much more portable, but no less potable, since it is filled with profiles of many worthy spirits, how they were enjoyed throughout history, and recipes for extending their scope into the future.

But today he wanted to demonstrate how well whisky takes on new and interesting guises by simply adding to it one other ingredient. 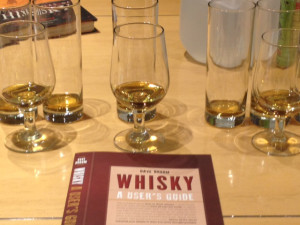 The author’s research for Whisky: A User’s Guide included the sampling of 102 different whiskies (and whiskeys,) with each undergoing dilution by the same 5 mixing agents. Although the spirits used in the mixed drinks came from various continents, the Glasgow native saw to it that a good many were scotch malt whisky.

And so, he provided each taster with several glasses containing a wee bit of three popular expressions of blended scotch, the Famous Grouse, Dewar’s 12 year old, and Johnnie Walker Black Label. To go along with these, were set buckets of ice and a cluster of the soft drinks, ginger ale, Coca-Cola, club soda, bottled green tea, and coconut water.

In response to the raised eyebrows toward the last two beverages, our host remarked that whisky mixed with chilled green tea is popular in much of Asia, and whisky with coconut water is the first choice of scotch drinkers in Brazil and throughout Latin America. Both formulas are growing in popularity, and such trends may reach our shores sooner than later.

I wasn’t the only skeptic in the room upon hearing such news. Actually, most of the attendees were unfamiliar with the virtues of scotch whisky. Many were impressed by how much they liked it once a little water took away the alcohol burn, but we were all surprised by how nicely it worked in combination with the various invaders, err, mixers.

Broom explained that one of his initial goals in writing the book was to make whisky more appealing to those who see it as too strong or too “serious” a drink. He recounted two recent conversations, one with a Glasgow cabdriver, and the other with some high roller businessmen attending one of his whisky tastings. Both parties confessed surprise that it was OK to add water to whisky. One of the executives said no one had ever before given him “permission” to do so. The author has happily taken on the task of ensuring us that we have full permission to drink whisky in any manner we see fit, and mixed with anything we feel enhances the experience for the better.

He then pointed out that drinking whisky neat, or “short” as they say in the UK, is quite new as a habit. For example, he reminded us that in the era popularized by Mad Men, whisky was drank “long” almost exclusively, and most often in highballs (mixed with carbonated drinks and served over ice.) And it was a standard highball that began our tasting experience.

We nosed a goblet containing a small portion of the Famous Grouse, and I was met by that familiar sherry-like bouquet of Macallan and Highland Park along with other malts and the lighter, edgier grain whiskies included in the blend. We were asked to taste it neat, and then we were directed to a highball glass containing the same spirit, into which we added a small amount of ice and some ginger ale.

Broom performed his experiments using two parts mixer to one part whisky, so he asked us to do the same. I quickly learned to include more scotch, as my palate is geared toward robust malts at cask strength. But I must say the character of the Grouse remained intact and melded very well with the ginger ale.

The sherried fruit aspect was emphasized by the sweetness of the soft drink, but that slightly smoky, slightly peaty quality to the Grouse seemed to lock onto the ginger’s spicy bite and the resulting concoction was really quite delicious. So much so that I reproduced my own version this evening, as I happened to have on hand some 18 year old Famous Grouse and a bottle of Reed’s Jamaican Ginger Beer. Given the more savory qualities of both, I included some plain seltzer water to add some fizz, and to get a better balance between the malt, ginger and cane sugar. I am enjoying it right now, as I type this.

The next highball was Grouse and Coke, which shifted things decidedly into the sweet and nutty. We then turned to the Dewar’s. While Broom extolled the virtues of the honeyed sweetness in this particular blend of some 40 grain whiskies and highland malts, the audience was having a hard time finding their way past the peppery alcohol burn. So he suggested a splash of water, which took the edge off for some of them. And then we tasted the Dewar’s on ice with Coke.

Not being a big cola drinker, these highballs didn’t do that much for me. But I know a great many people who spend their nights out with Rum and Coke, or Jack and Coke, so it makes sense that the profile of certain scotch whiskies should fit well with colas. Even Broom quipped that he might face expulsion from the lofty fraternity of the Malt Maniacs, should they discover his new enthusiasm for mixing a venerable 16 year old single malt from the Isles with a certain soda pop from Atlanta.

After all, there are a great many single malts that offer considerable cola nut notes – Glenfarclas 17 and Bowmore Springtide come to mind. I must wonder if others besides the intrepid Mr. Broom will feel it’s not a waste of money to mix such pricier single malt.

As Dave Broom reminded us, whisky was almost always drunk long until the final decades of the twentieth century. Centuries ago, it was often flavored with herbs and spices, spruce, and even meat. Punches were popular though the 1700s, and toddies and tipples thrived throughout the Industrial Revolution.

Even Queen Victoria was known for mixing her whisky with wine. But in her day, the favorite pre-dinner drink of the Prince of Wales, along with many refined Victorians, was brandy and soda. After the French grape crop was blighted in the 1870s, the upper classes went looking for a suitable replacement. And what better choice than something from Britain? Soon, every gentleman from Winston Churchill to Sherlock Holmes was drinking whisky, but most often they took it in soda. And that was Boom’s choice for our third mixer.

A Classic Revisited – Scotch and Soda

The remaining mixology was conducted with Johnnie Walker Black Label. This is a smooth yet smoky blend featuring malty, fruity and grassy Eastern whiskies like Speyside’s Cardhu, and Royal Lochnagar made near Victoria’s old haunt, Balmoral castle, fused with the weighty flavors and peat smoke of the western whiskies like Talisker, and most notably Caol Ila from Islay.

Fizzy but unsweetened, Club Soda allows the darker character of smoky whisky to shine, while also diluting the hot effect of the alcohol esters, without adding more in the way of sweets that might turn cloying alongside the malty sugars inherent in the scotch.

There are good reasons scotch and soda was considered a classic drink since it was imported to America around 1910. It is sparkling with refreshment and wonderfully quaffable. But this is so often forgotten by younger drinkers like myself, eh hem.

It is true that most Club Soda in health-conscious America is now made with potassium citrate rather than the sodium used in the traditional stuff. It does taste differently, and is without the subtle salty flavor, but it still mixed very well with the Black Label, probably due to the salty nature of the coastal and island whiskies present in the blend.

The Exotic and the Tropic

When it came to the more unusual mixers, the green tea actually fit like a glove. It too allowed the hearty qualities of the Johnnie Walker to come through, while adding an enhanced thirst quenching aspect. This tea was unsweetened and rather tannic, and Broom suggested some sugar syrup might make it better. But I thought it was just fine as is.

The coconut water was by far the most exotic entrant in today’s pageant. And yet I found it most enjoyable. I know that others at the table thought coconut water bizarre to begin with. But it is as common a drink in Brazil as seltzer is in New York City. The woman on my left remarked that a chilled glass of whisky and coconut water would allow one to hydrate while dehydrating, which makes it ideal for places like the equatorial rainforest. Or for that matter, the stifling swelters of the Hudson Valley during the annual Fourth of July heat wave.

I could easily see myself in a sunny clime, under a palm tree, with a tall glass of ice-cold coconut water and a healthy portion of Black Label, or perhaps Double Black, if not some Oban. The fatty quality of the nut was dominant, mouth-filling and slithery, and ever so cooling as it slipped down the throat. The whisky’s malty smoke and spicy fruits took on the role of the subordinate flavoring, rather than primary components, yet they remained for the rest of the afternoon, a pleasant souvenir from the tasting.

While I remain firmly in the camp of black coffee in the morning and straight scotch at night, I was pleasantly surprised at how much I enjoyed this rare venture into the world of the mixed drink. Now I have some options if I do not wish to seem austere when out with festive friends.

Of course, there are many more flamboyant or elaborate cocktails one can make with whisky, reaching far beyond the Rob Roy or the Manhattan. And Dave Broom’s upcoming book contains a great many recipes for whisky based drinks, some from the distant past, some from the Gilded Age, and some that are newer and more daring.

It should prove a highly entertaining read, as well as being practical for those who like cocktails, highballs or who simply wish to enjoy whisky in new and interesting ways.

And that is one man’s word on …

EXTRA! Read all about it: We ran into Dave the next evening, at Whiskyfest 2013, where he had served as moderator for one of the high-priced, private seminars, and where we both enjoyed countless examples of the world’s best spirits. Read the Full Whiskyfest Report Here