There is a feature article in today’s New York Times, originally created for their kids supplement, that goes through the step-by-step process of making an acoustic guitar, at C. F. Martin & Co. in Nazareth, PA.  And it has some nicely composed photos to go with it.

The article on Martin Guitars is probably only available to subscribers. But if you are familiar with Martin and their factory, you probably already know everything mentioned.

How to Build a Guitar

The buffing machine pictured above sits right next to the Martin sound testing room where I make my annual guitar review videos. If you turn up the volume and listen closely when I am not playing a guitar, you can sometimes hear the buffer whirring away.

As I read this human interest piece, I was reminded me just how many things have changed since I first started visiting the Martin factory, when it comes to the automation. For example, there is a photo of a large side mending machine, where steam heat and high pressure bend the thin solid-wood plates into the shape needed to create guitars of different sizes. Each size has its own machine. Not long ago, that was all accomplished by hand, taking much longer to make a certain number of usable sides.

When I first toured the factory some twenty years ago, the sides for every guitar made at Martin was still being bent by the hands of a man using a curved electric iron (also invented and made at Martin.) He soak the wood in water before molding it on the hump of super-heated steel, holding it in place long enough to change its shape while being very careful not to scorch it. Before electricity, the humped irons would have been heated in burning coals. On my second visit, they had just invented (and made on site) the first experimental side bending machine, to make the Dreadnought size guitars. But all other sides were still bent by hand. 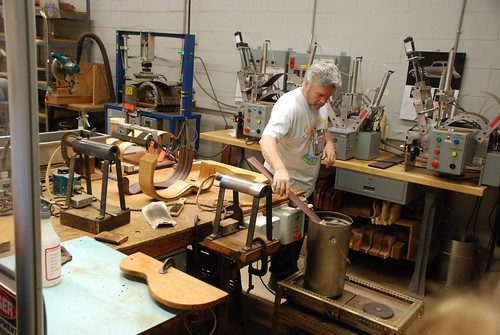 Later, only the sides requiring a “cutaway” on the treble side of a guitar were being bent by hand for guitars of common sizes. Today, that man and his side-bending counterparts have retired, and almost every Martin guitar made in Nazareth has its sides bent by a machine.

But while the article and photos focus on automation involved in guitar making in the twenty-first century, they also make clear how the actual construction of a guitar is done by human hands, the most important parts anyway. And it is enough so that Martin can proudly claim their guitars are still handmade.

C. F. Martin Sr. invented what is now considered the American guitar, at roughly the same time Antonio de Torres Jurado was working to develop what became the Spanish guitar. In fact, Martin developed what became the American acoustic guitar by combining luthiery techniques he learned in Vienna, Austria with elements of contemporary guitars from Spain that he encountered once he emigrated to America in 1833. By the early 1840s he had invented the X-bracing pattern to support the spruce soundboard, which turned out to be the ideal design for getting the most tone out of the steel guitar strings that came into use in the early twentieth century, decades after Mr. Martin died in 1872. But many of the techniques used by Martin craftspeople today would be familiar to old C. F. Sr.

A photo in the article shows a woman hand carving the braces that support the spruce soundboards. Another shows a collection of soundboards clipped to a large paddle wheel, as the glue binding the two halves together dries in the open air, before they have their bracing attached. Martin has two or three of those in-house invented paddle wheels, made of metal, with various adjustable joints. But it was only in the past decade that they retired the wooden paddle wheel invented in the 1800s.

While Martin and other guitar makers use modern technology to speed up the process, and save their workers from considerable repetitive stress wear and tear, the Martin guitars themselves are still made very much they were all along, from the hand-fitted dovetail neck joints to the hand-buffed nitrocellulose lacquer so thin it is measured in mils, that being one-thousandths of an inch.

This factory, one of the oldest family businesses in America and the oldest musical instrument maker, may produce upwards of 200 guitars a day in modern times, but it still takes a month more or less, to make one Martin guitar. And that is with all the mechanical streamlining.

As has been the case since before the America Civil War, an old Martin sales slogan remains true to this day. More people own or want to own a Martin than any other guitar in the world. And with good reason, too.

Visions of Johanna – 50 Years Ago Today