The BBC News Magazine writes that an experiment conducted by the television program Trust Me, I’m a Doctor suggests reheating pasta can greatly reduce the rise in blood glucose.

University of Surrey scientist Dr. Denise Robertson explained  how cooked pasta that had been cooled down would be treated similar to fiber, resulting in fewer calories absorbed, a smaller peak in blood glucose, while providing greater nourishment for helpful gut bacteria.

It was not known what happens when you reheat pasta.

But it was suspected that reheating the pasta would negate such healthful benefits. So Dr Chris van Tulleken of Trust Me, I’m a Doctor decided to find out. He was surprised to learn the opposite appears true.

Cooling cooked pasta and then reheating it seems to convert the pasta to an even more “resistant starch” that digests more slowly, and in their one experiment with several volunteers, blood glucose levels were notably lower than eating cooled pasta, and 50% lower than eating pasta that had never been cooled.

As a result of the experiment, Diabetes UK will fund further research by Dr. Robertson into whether resistant starch like reheated pasta could improve blood test results associated with Diabetes.

While one experiment hardly proves the case, I will now start cooling my pasta during my rare carb indulgences and try reheating it in a steamer. 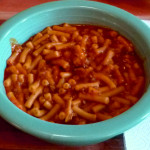 Happy May Day Everyone!